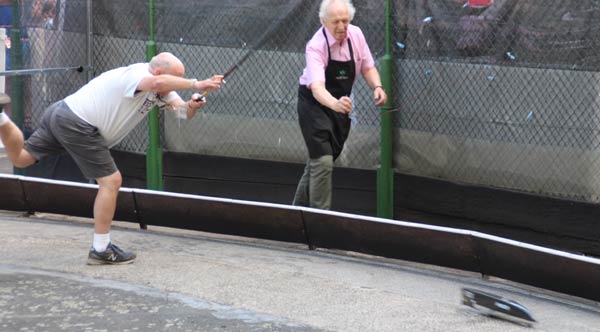 The racing of tethered cars began in the late 1930s growing in popularity throughout the 40s and 50s in both Eastern and Western Europe, the US and Australasia. The concept of the sport is simple and has remained unchanged since its inception. Initially the models resembled full sized cars but over the years they have developed and become refined into extremely fast, streamlined vehicles. The car is connected to a rotating pylon via a steel cable of varying dimension depending on the class of car. The cars are pushed off and horsed up to speed, a process that has remained unchanged for seventy years. When the competitor is satisfied with the speed of the car being indicated the timing begins for the number of laps that equates to 500metres following which the fuel is turned off by means of a trip lever on the car. Caps, rags and mats sufficed at one time but now it is a precisely adjusted mop. As with the hydroplanes it is the search for ultimate speed that drives the competitors on.

British enthusiasts have two styles of racing that can be pursued, modern FEMA style cars or retro and vintage models. OTW has a series of articles detailing the histories of International and British tethered car racing and the organisations that have been responsible over the years.

There are two bodies governing tethered car racing. FEMA (Federation Europeenne Du Modelisme Automobile) founded in 1952 and WMCR (World organisation for Model Car Racing) founded in 1978. Each organisation has its own rules that are broadly similar although there are hopes that these might be unified in due course.

Clubs, Associations and contacts within the UK

The draft calendar for the coming season has been published, principle dates below. Up to date information is available on the speedmodelcar website.

Tethered car racing like almost every other speed based modelling discipline that seeks to achieve ultimate performance requires dedication, persistence, knowledge and expertise, relying on a hard core of interested members and competitors. To this end, Oliver Monk who competes in all classes except 1 or 3b regularly publishes his ‘Workshop Ramblings’ on OTW detailing the development of his current cars, the rebuilding of older models and several new builds, both for the FEMA classes and retro events. He also has an in depth knowledge of the close knit group of those who can supply everything from complete cars down to individual spares, a necessity for anyone wishing to compete.

The car is the essential piece of hardware, and for those interested there are a number of routes available to become the owner of a modern FEMA car and, hopefully, competing. The first step being to contact the national authority. For the UK this will be  the  BTCRC, which is the umbrella organisation.

From there on there is the option of purchasing a second hand car by visiting meetings or perusing the speedmodelcar site that often has complete cars for sale, including some exceedingly successful examples and even record breaking models.

There now exists the possibility to purchase the major components required and with a modicum of engineering, assemble a car yourself. Not as daunting though as building a car from scratch, which is another option for those with the facilities and expertise.

David Giles has been the most successful British competitor of the modern era being the only Briton since 1956 to become a European Champion. After a lengthy period of retirement from active competition, a trip to a meeting at the Basel track rekindled his interest and he took the decision to design, build and develop his own 3.5cc car (originally Class 5). The car proved to be a consistent front-runner in competitions and achieved 4th place in the 2005 European championships.

David very kindly provided an account of the development of his car in the article DJR3 and the innovative Papagai.

Mark Osborne, an Australian we met in Basel in 2013 provided OTW with a very helpful and illuminating article that described in detail, with relevant costing, a project to build a number of new Class 5 10cc cars, starting with CNC machined pans.

For anyone interested in international competition, the latest edition of the rules (both FEMA and WMCR) are available on the website www.speedmodelcar.com.

Registration of a car is initiated by contacting the BTCRC for the allocation of a racing number – "GBxxx" – and by submission of a ‘Daten Erfassungsblatt’ (specification data sheet) that is filled in and submitted to the FEMA Technical Secretary by the BTCRC Technical Secretary after he has inspected and scrutineered the car to ensure that it has satisfied the technical specification and design criteria for the relevant class. The car then receives a registration number, which has to be engraved on the bottom pan, and a racing licence. It is the intention that all car and driver registrations will eventually be held online.

There is no subscription to either the BTCA or BTCRC, but there is an annual fee per driver of 10 Euro and an annual national fee of 100 Euro, to be paid to the FEMA treasurer around the start of the racing season. The national fee is simply divided by the number of active drivers, collected by the FEMA point of contact and passed directly to the FEMA secretary.