Off the Beaten Track

I have always admired the beauty displayed in Italian engineering and it resulted in me acquiring a few Italian vintage motorcycles as well as several model engines and one early post WW2 example is the Atomatic 5cc shown here. Your editor saw it in my display case at the British Nationals last year and asked me to pen a few words. This was a problem as very little has been published in the UK on the marque and so I asked a friend in Italy Salvatore (Salvi) Angeloni, if he could help me and he sent most of what follows here and I am extremely indebted to him.

I knew Aviominima had distributed the engine and were based in Rome and that they had previously made a 4cc engine and that was the extent of my knowledge. The company was set up by Uberto Travagli born in 1920 while still a student of engineering at the Rome university. He was also Chief Editor of "Aquilone" (The Kite) the Italian Aeromodelling magazine. He set up Aviominima in the early 1940’s and traded from a shop in Via San Basilio in Rome. This was under Travagli’s home with just enough space for a small workshop. They sold plans, materials and modelling goods including engines made by a famous engine builder Elios Vantini of Padova who designed the Antares 4cc diesel made from 1942. Vantini was producing syringes commercially and what pushed him into making model engines is unknown, but good for us modellers? Only small numbers of the Antares were produced and today they are extremely rare, just like the Atomatic.

Travagli probably influenced by Vantini designed his first model engine the Atomatic 4 of 4cc in 1944, this had straight horizontal exhaust extensions and was followed in 1945 by the second version Atomatic 4 with down slanted exhausts. The help of his dearest friend Giovanni (Ninetto) Ridenti a very famous Italian Modeller was invaluable. The small workshop housed a lathe, milling machine, drilling machine and a flypress and employed a few craftsmen from the adjacent Breda Weapons factory, some of whom made parts in their spare time to supplement their income. The castings were produced by a foundry in another part of Rome.

The engine is a front rotary valve unlike the Antares which is a sideport and has an air control to vary the mixture another difference to the Antares. Bore is 16.5mm and stroke 20mm giving the tall appearance of the A 5. The fuel tank is situated around the front bearing housing with a screwed on cup giving the streamlined look in a very similar manner to the Antares as shown in the photos. Stylistically similar compression screws are used. The alloy casting is very clean and well finished seemingly made from a permanent mould. The Antares has a three lug mounting at its rear while the Atomatic has a mounting ring screwed into the rear housing with a central hole to clear the built in spring loaded "air bleed" engine cut-off. It has three screw holes to fix it to the bulk head of the model giving a very streamlined and clean overall look, very Italianate I would say.

In 1944 Travagli designed the first Italian Control line model called the "Swing" unique in that it had no bellcrank with the control wires directly connected to the elevator, it was powered by the Atomatic 4. It was a very elegant design, which sold well. The shop became a meeting point for all Roman Aeromodellers and a few American servicemen visited as well, among them John Zaic younger brother of the famous Frank Zaic. In 1947 the Atomatic 5cc was introduced again with the elegant down slanted exhausts as shown and a few of the Atomatic 10 probably of which only ten were made.

Shortly after this the shop closed for a few years and reopened in the early 1950’s, but production of the Atomatic engines had ceased and only other makers products were now sold including a few Tether Model Cars such as the Alfa Romeo Alfetta, Cisistalia, Ferrari 125 GPC powered by direct drive engines of 1-1.5cc. There was also a streamlined model in the catalogue for 2.5cc engines such as the Osam 2500, or Supertigre G20. The cars were made and assembled in the Aviominima workshop in very small numbers and like the Atomatic engines today are extremely rare and sought after.

Uberto Travagli never graduated in engineering from the University probably with too many distractions?? He died in 1993 leaving some of the most beautiful model engines ever made.

Byra and Vega cars with a selection of engines

Vega from Antony in France produced a whole range of modelling items including five types of motor from 1.5cc to 30cc,  twenty car models, either finished or for the home constructor, ten sizes of wheel and tyres along with fuel and accessories. The company also advertised that they could supply nitro methane. The 1954 'D Type' Jaguar was available in two sizes, a 5cc from 1955 and a smaller 0.9cc about 1959.

The Vega is a very compact front rotary engine with a very short distance between the centre line and the back of the prop driver face, and much research revealed that a 1956 Barbini B38 Mk 1 1cc and possible an Aquila Baby 1cc would match this, so as I had a nice unrun Barbini to hand, a lovely engine, this was used. Alan Knight turned it into a twinshaft (both shafts driven) to my drawings, and it fits exactly in the car. See Alan's article below for more photos of these conversions.

An interesting little reed valve 1cc car engine came into my possession a while ago, and this is an example of the North London Model Car Club (NLMCC) design intended for model rail cars in the early 1950s. I suspect that this is the particular example shown in Mike Clanford's engine book, having been through a number of hands over the years. It is a fairly well made little engine by an amateur model engineer, but needed a fair bit of sorting out. The con rod was filed from soft aluminium and had oval big and little ends as well as a twist, and the piston had a hairline crack from the gudgeon pin hole to the skirt, though compression was fair. I found that an ED Baby steel con rod was an exact replacement fit, surprising as 0.46cc versus 1cc capacity is a big difference, the NLMCC being very over square.

A Black Panther and other car related projects

Setting the points would be a nightmare as you would need to remove the axle, transmission tube, guess the gap and reassemble before doing a continuity check to see if the points are working, I would suggest the designer was not gifted with a practical mind….. I think the castings for the case and diff housing came from Don Sohn along with some very dubious drawings but despite that I think it may run as the intake, transfer and exhaust timing is sort of OK and the compression is very strong - probably easier to run it as a glow considering the points issue. The exhaust manifolds could do with a polish but I think I will leave that for the owner to do - I’ve had enough of it!!

Further to my earlier comments: As I have some level of mechanical sympathy I have not yet plucked up sufficient courage to try to turn the motor over via a wheel. The piston liner fit is excellent and the bevel gears are shall we say trivial (the spur on a 0.187" diameter section of the shaft). For initial starts it may be best on a loose glow plug to lessen the loads on the power train. Without the tube and axle assembled the motor feels very nice and springy but the drawings don’t give any viable dimensions for the combustion chamber so the ratio may be high - perhaps I should make a few shims and pass them to the owner!

The Black Panther was claimed by the manufacturers to be 'Screaming streak of fury', Vicious and diabolical',  'Deadly to all competitors', 'Absolutely the hottest piece of iron to ever hit the track'? The company also made great play of the 'completely enclosed fly-wheel and timer' that Alan comments on. 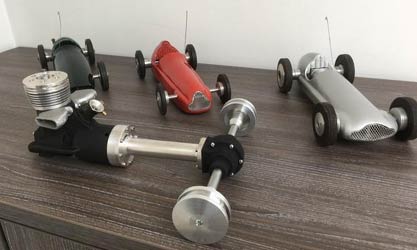 If anyone is interested I have quite a lot of photos of the build and anyone is welcome.

Back in the 90s, Ivan Prior built a batch of twinshaft motors based on PAW components. A few years later, Tony and Gig Eifflander built just two twinshaft motors as a commission, based on their 2.5cc TBR engines. Alan has built this current batch on the earlier crankcases, which have been enthusiastically pursued on eBay or by private buyers. Hopefully we will see one or more in action once the Buckminster track is re-opened?