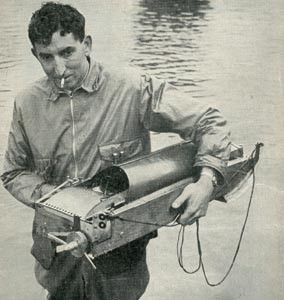 In 1953, Bernard Pilliner wrote a series of very detailed articles for Model Engineer. He subtitled these "A chronicle of experiments, trials and tribulations." No one that has ever had any connection with flash steam hydroplanes would dispute that they create all of these in equal measure, with a great deal of frustration and untold dedication and hard work thrown in. There also seems to be something in the psyche of the flash steam enthusiast that determines that once they are involved they are hooked for life and unlikely to give up the quest, whatever the difficulties they face. This was certainly true of Bernard, right from his first forays in 1936 through to his sad and untimely death in 1970.

Bernard Joseph Pilliner was born in Peckham, London on the 2nd of December 1916 two years after his brother Eric. After the family moved to Harvey Road Guildford, he spent a few months at Charlotteville School before starting at the Royal Grammar School, Guildford in September 1928. Having passed his school certificate in 1933 he gained a four-year apprenticeship at Dennis Bros in Guildford. Dennis was a well-established commercial vehicle manufacturer, best known for their fire engines. Bernard’s apprenticeship started in the last week of November 1933, and from the outset it seems that he had a remarkable talent towards engineering, and design work in particular. He spent a great deal of his time in the jig and tool drawing office as well as attending Guildford Technical College on day release and for evening classes, gaining his ONC in the process. During the last year of his apprenticeship, Bernard spent 6 months assisting the works manager. On the completion of his four years, Bernard moved into the jig and tool drawing office permanently where he was involved in the design of all sorts of jigs and tools for the next 2 ½ years.

Whilst still an apprentice Bernard had joined the Guildford Model Engineering Society where he and tethered hydroplane enthusiast Frank Jutton became very closely involved. Bernard had an old Rudge motorbike and used to take Frank on the pillion; every now and again the spark plug connection would pull off and Bernard became skilled at reconnecting it while they were still going along! Before the war, the two men would go to meetings at the pond at Stoke Park, Guildford to run their boats. Frank was running IC engines at that time, but it was to be the mysteries of flash steam that would attract Bernard and dominate his building and racing career from then on. He started building his first flash steam hydroplane around 1936 just as Stan Clifford surrendered his long-standing steam record to the Innocent Brothers and their IC engined ‘Betty’. Unlike the rest of Bernard’s boats, this one did not carry a name and was a relatively conventional, metre long, single step rectangular hull, constructed of tinplate as was common at the time. Bernard’s reasoning for the choice of tinplate- ‘non inflammable’. The steam generator was 33 feet of tubing in two coils, heated by two burners fed from a pressurised fuel tank.

He was to discover very quickly that persuading a flash steamer to run properly requires an incredible amount of work, perseverance and experimentation. At best, the boat, with its twin cylinder poppet valve engine could only manage around 18mph, compared with Stan Clifford’s record of 43mph. As a first attempt at a steamer, the boat was far from a failure, but it was the spur that would see Bernard at the forefront of experimentation and design into the 1950s.

Shortly after the start of the war, Bernard left Dennis Bros and moved to the Ministry of Supply HQ in London as a draughtsman where he was involved in secret work with heavy machinery and hydraulics. This lasted 9 months before he was on the move again, this time to Aerolex at Camberley where he took charge of the drawing office designing tools for aircraft production. In January 1942, after a year at Aerolex Bernard was back in Guildford, but this time at Vokes Ltd who specialised in making filters, especially oil, air and fuel filters for aircraft. 1942 brought change of a much more personal nature when in the summer, Bernard married Mary Wales. As well as gaining his technical qualifications, Bernard had also been working towards recognition by the Institution of Mechanical Engineers, starting as a student in 1937 and becoming a graduate in 1938. In January 1943 he was accepted as an Associate Member, becoming B.J. Pilliner. A.M.I.Mech.E. It was certainly an exciting time for the Pilliner's as 1943 would also see the arrival of their first child, Anthony.

With the cessation of hostilities hydroplane racing gradually returned and Bernard was able to continue to experiment with ‘Frisky’. The hull this time was built from plywood and slightly narrower than the previous boat. The boiler was now 40ft of ¼" tubing, still with the same burner arrangement and pressure fed tank. He changed the engine to a single cylinder, still with poppet valve inlet and uniflow exhaust that was coupled to a significantly larger submerged propeller. All this was a great deal more effective with official runs up to 38mph being recorded. The engine was later replaced with a piston valve engine of smaller bore and stroke, which would become his standard design from then on. He considered that the poppet valves were giving rise to valve bounce so ruining the timing and steam admission.

He also came to the conclusion that the burners were the key to a successful flash steam plant and changed from two to four burners, but with a common vaporising coil within the boiler casing. To take advantage of the extra heat he increased the amount of tubing in the boiler to 60ft, but this did not quite work the way he had planned.

Bernard was discovering the frustration that every other flash steam enthusiast experiences, that of lack of consistency. ‘Ginger’ experienced all sorts of mechanical breakdowns yet if it did run at top speed, would invariably nose dive into the water.

During the period that ‘Ginger' was under development, the family moved down to Hampshire where daughter Loraine was born in 1948. It was not only in his modelling activities that Bernard was showing such ingenuity and design skill as he was working on all sorts of developments at Vokes and in 1949 he was awarded the first of several world wide patents. The experiments continued on the boat and steam plant, trying to get an even spread of heat in the boiler casing. Bernard faced the same problem as others had with a steamer, that as it goes faster, so the burners are having to work in an ever increasing and turbulent wind which can play havoc with the flames. Bernard referred to it as "the No 1 flash steam ‘bug’ owing to the difficulty of finding out what is happening when the boat is running." Jim Bamford, Frank Jutton and Bernard tried all sorts of ideas for flame tubes, boilers, cowls and shrouds in order to keep the ‘fires burning’. Jim even built his own wind tunnel that was suspended in the door of his shed.

This did away with the need for skegs, drive shafts or universal joints, but at the expense of having the heaviest component right at the back. The boat was now virtually all boiler with four burners firing into four coils, all surrounded by a complex casing with hinged air scoops and adjustable flaps. Even so this was not solving the problem as the boat was only reaching about 50mph, so the casing was redesigned to take air directly from the front of the boat and the burners mounted on a spider.

Having proved the concept, the boat was rebuilt and Bernard then set about solving the next problem, that of keeping the boat on the water. This is nothing new and is still taxing the flash steam runners today. To get a boat weighing 16lbs onto the plane needs a degree of lift in the hull shape. Once the boat is running fast enough, the lift becomes an embarrassment and it takes off and flips. Whether it is a hull like ‘Frolic’ at 70mph or Bob Kirtley’s ‘Pisces II’ at 120mph, the result is the same. Bernard was philosophical about the whole thing, commenting that "one picks up the wreckage and plan for the next season." He did consider slowing the boat down to ‘avoid the flip’, as a ‘boat of moderate speed, which is sufficiently stable and mechanically reliable to finish the course can get results in regattas.’

Aerofoils were not to be the answer and were subsequently banned, and so Bernard adopted the method of setting up a boat as used so effectively by Ernie Clark and Arthur Cockman. This was to lift the bridles so that the boat was running on the inside edge only, spilling excess air.

As well as raising the bridle attachments, Bernard moved the entire engine unit to the inner side of the hull to keep the prop in the water and added a large fin to aid getting the boat way. Was it any better? No, ‘probably worse’ as it lowered the ‘flip speed’ so ‘after two or three months put everything back where it was. The boat does not flip as it is now only doing about 60-65mph on flat water.’ This all serves to show just what the level of frustration can be trying to get flash steamers to work effectively and reliably. In amongst the difficulties though, there would continue to be competitive runs and regatta successes. One such run in 1952 would give Bernard the prestigious Crebbin Cup for the second time.