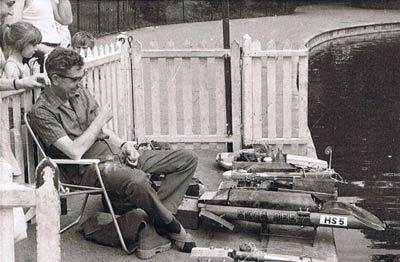 Bernard came to the conclusion that another new boat was needed and ‘something of a compromise between ‘Ginger’ and ‘Frolic’ may be an advantage, still with a rear engine but short shaft and conventional prop.’ (rather than the flywheel) This thinking would result in an entirely new and innovative boat arriving in 1953, ‘Eega Beeva’.

As in Frolic, the engine unit in Eega Beeva was also mounted horizontally. The pumps are mounted on the drive end of the motor  with the water pump one side of the reduction gear  and the fuel pump on the other. The single cylinder engine is notable in that it has a shuttle piston valve that controls both steam admission and exhaust, rather than a uniflow exhaust common on many other motors. The cylinder with the lid is the displacement lubricator that pumps steam oil directly to the piston valve, just under the steam inlet.

‘Eega Beeva’ made its debut at St Alban’s Regatta where ‘his usual ingenuity and fine work’ were commented on in Model Engineer.The regatta report noted that the boat was ‘obviously very powerful, but suffering from the usual plague of flash steamers, cooling off after a few laps.’

Bernard and ‘Eega Beeva’ won the Crebbin Cup again in 1955, but he was attending fewer and fewer regattas as plans were afoot for a much bigger project, not connected to models in any way. He had previously set-up in partnership with two others, Messrs Davies and Palmer as DPP doing engineering/design work. As daughter Loraine recalls, 'For donkeys years every fire appliance you could find had a DPP hosereel assembly on the back, another Pilliner design.' Then, in 1957, Bernard and Mary set up their own company, Rational Automation, to develop and supply automated process machinery to the food production industry. Here he continued with his innovative ideas being awarded several more international patents specifically relating to the baking industry. Some years later they were joined by draughtsman Brian Partridge who would eventually become a partner in the company. In 1968 Bernard was awarded full membership of the Institution of Mechanical Engineers.

Loraine adds 'Rational Automation was an inspired name (my Dad's idea) and rational exactly describes the work he did.  He designed and built all kinds of machinery, most of it for the confectionery trade - I grew up wandering in and out of his workshop to see the latest 'mock-ups' and also went up to Jo Lyons with him to see the machines in action. They were fascinating and as kids we made ourselves sick on all the confectionery companies sent to Dad to try out his mock-ups.' The 'Muffin Case Denester' was of particular interest to OTW, being partial to these and their smaller cousin the cupcake. This machine would take individual preformed muffin cases from a stack and place them ready for filling. Bernard Pilliner's patents are all available to view online.

In the obituary by Peter Lambert, Chairman of the MPBA, he wrote, "Bernard was a man who had the respect of us all, his personality and sense of humour at the pond side always added to any regatta he attended. He was the perfect sportsman at all times. The hydroplane world will be the poorer for the loss of such a fine, knowledgeable and experienced engineer."

In one of his last commentaries, Edgar Westbury wrote of Bernard and the other flash steam competitors at the 1970 International, "I do not think that there are any more difficult problems in model engineering to be overcome, than in making a flash steam hydroplane perform satisfactorily." Bernard had so nearly achieved this, but his thinking and design ideas would inspire others to continue the quest, culminating in the great flash steam renaissance of the 1980s and 90s.

Rational Automation, the company that Bernard and Mary set up, continued after his death providing ‘Bernard’s innovative designs to most of the world’s leading bakeries.’ Loraine explained that 'The designs were so good that the company survived on Dad's work for decades after his death, simply by Brian modifying them, as he knew the machines really well by then.' In 1995 the company became part of the BSA- Regal Group.

‘Eega Beeva’, Bernard's last boat, has also survived and was donated to the Auckland Model Engineering Society in New Zealand where Tony Pilliner now lives. It was the society contacting OTW to say they had this boat that started off the whole venture.

Eventually we were put in contact with Tony who very kindly provided us with an incredible archive of photographs relating to his late father’s activities and tethered hydroplanes in general. The story does not quite end there as in 1976; Bernard’s widow Mary had married his life long friend and fellow flash steam enthusiast Frank Jutton. Tony ‘volunteered’ his sister Loraine to talk to Frank and Mary to add a more personal perspective to this article. Happily, not only have they been able to do this, but have also provided us with a fascinating account of Frank’s involvement, enabling us to produce a second article detailing his long and remarkable career with tethered hydroplanes.