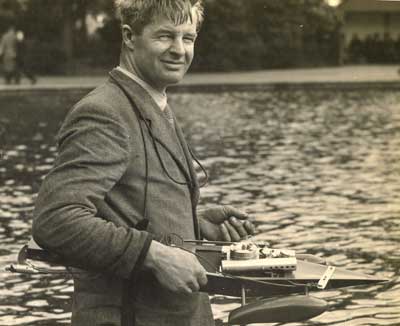 Jim Bamford and his boats

In the late 60s a young student in London bought a large boxful of Model Engineer magazines dating from the early postwar period. Being involved with hydroplane racing (life size that is) he absorbed every article, name and detail relating to tethered hydroplanes. Four of those names were permanently stored in his memory banks through their desire to ‘do things different’, and their work used as examples in essays, studies and tutorials. George Lines’ and ‘Sparky’, Stan Clifford with ‘Polyester’, Bert Stalham’s gorgeous supercharged vee twin engine and lastly Jim Bamford and his appropriately named flash steam hydro ‘Hero’. Each of these offered a radical approach to getting a hydroplane to run fast, which is what so fascinated that student.

Fast-forward 35 years, and an email to OTW from Jim Bamford’s son Rob brought these memories flooding back. Sadly ‘Hero’ had not survived the intervening years, but all Jim’s other boats and engines were still in existence, and would we like some photos? A fascinating selection of pictures and a great deal of help from Rob Bamford has enabled OTW to look back at the career and creations of Jim Bamford, a true flash steam enthusiast.

Although having no formal engineering training, serving four years with REME during the Second war working on tanks gave him the mechanical skills he was to put to such good use in his boats and engines. Jim Bamford worked initially for the Royal Aircraft establishment at Farnborough and after the war went on to the National Gas Turbine Establishment as a combustion scientist, which would explain his fascination with flash steam.

The involvement in tethered hydroplanes came after the motor cycle scrambling he had been pursuing started to prove too expensive. In September 1949 Jim attended his first ever regatta at Guildford and it was almost certainly there that he met Frank Jutton who was to be a lifelong friend, ally, inspiration and a total flash steam fanatic from the 30s onward. By 1950 the IC engined boats were unbeatable, but a few enthusiasts such as Frank, Bernard Piliner, Arthur Cockman and Bert Martin spent disproportionate amounts of time and effort in keeping flash steam hydros on the map and soon Jim was to join this small but elite band.

Unfortunately flash steam hydroplanes are notoriously fickle and absorb hours of work experiment and cause endless frustration. Not only was Jim using the new boiler but he was also attempting to be the first to make a steam turbine work in a model hydro. He wrote extensively of the trials and tribulations of trying to get this combination to work but kept coming across the same problem. What worked well stationary on dry land could not be maintained on the water. Keeping the burner going at speed proved almost impossible so in an effort to overcome this difficulty he rigged up a wind tunnel in his shed door with Hero suspended horizontally in a drum and a fan driving off the prop shaft.

Applying the principles adopted for the second Hero the hull was two tapered vee sections joined at the engine bay. Viewed from the top, the boat resembled a squashed diamond with the bottom cut off. Solid sponsons on outriggers formed the front planning surface while the rear relied on the prop for support. The whole deck was absolutely flat although a formed aluminium coaming was added to the foredeck later to keep the water out of the intake. JAB 3 regularly recorded class wins and had numerous places to its credit. It soldiered on for many years long after it was outclassed, but kept winning through reliability and being able to handle rough water.

Jim did build a more advanced version of the engine with a twin piston arrangement for forced induction but the records cannot provide any information on its performance. His final IC motor was a 15cc twin two stroke engine for JAB 3, but to quote "it was all revs and no go", even when tried at a later date in a more modern hull. As a design, JAB 3 still remains one of the most unusual and intriguing boats of the 50s.

Too often the relics of a career in racing are dispersed, or even worse, destroyed, but fortunately Jim’s son Rob was not only interested in tethered hydro’s and flash steam but positively enthusiastic to the extent that most of the boats and engines described have been preserved in the family with a view to having them all running at some stage. Rob did attempt to run ‘Inferno’ but it proved too temperamental so he then set to and built an ‘A’ class steamer of his own. Pressure of work precluded too much development with this boat, but by way of a diversion he then produced a ‘C’ class steamer, which must be the most difficult of all the disciplines to succeed with. It is to be hoped that time will allow Rob Bamford to restore all the boats to running condition as well as complete the development of his own ideas.

OTW is indebted to Rob Bamford for all the information and photographs that made this article possible and the ‘young student’ is equally grateful for the chance to rekindle his interest in Jim Bamford’s boats.

Jim Bamford and his engines

OTW recently had the pleasure of visiting Rob Bamford who gave us a conducted tour of his father's many boats and engines. The following pictures give a detailed look at the huge variety of engines produced and illustrate the high quality of engineering evident throughout. Thanks to Rob for his time and patience in giving us this insight into one man's passion for tethered hydroplane racing.

Jim Bamford expended a great deal of time and energy trying to build successful and competitive Flash steam hydro's powered by turbines. If the turbines failed to produce the speeds expected he would  remove them and run the boats with conventional reciprocating engines. Jim would devote just as much time and thought to developing these and ultimately they were to prove faster than the turbines.

Jim Bamford's experimental nature is also evident with the IC engines that he built and raced as a distraction from the problems encountered with the flash steamers.

Update:  August 2014 Thanks to Rob for copies of MPBA letters above. Additional original photos courtesy of the Westbury family