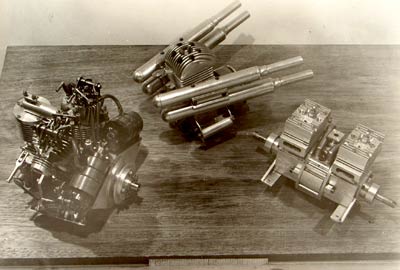 Three of the amazing engines from King's Lynn

His first interest was model aeroplanes, and a Model Engineer article in 1932 describes the building and early flights of ‘Peggy’, one of his planes. In a recently discovered diary entry for July 21st, it records ‘Flew Peggy- flew beautifully- thing of beauty’.

By the mid 30s, Stalham was fed up with retrieving and repairing planes and joined one of his fellow aero modellers who had become involved in building and racing tethered hydroplanes.

Stalham’s new boat was a more conventional scow design and at one of the last peacetime regattas at Wicksteed in August 1939 he and John Duffield were photographed together, with the comment that ‘they both owned very interesting 15cc boats’. Unfortunately, ‘Burr’ did not get away on any of the three attempts at that event. Another new boat, ‘THA II’, appeared after the Second War, equipped with aluminium side planes and a surface prop, which allowed it to run at 40+ mph.

He was still not done with hull design as a new, very radical design was to prove. Variously christened ‘the Torpedo’ or ‘Stalham’s Spaceship’, this was like something out of Jules Verne. Yet again, the engine, including the exhausts was completely enclosed in a bullet shaped hull built model aeroplane style, with solid sponsons on outriggers each side.

In spite of a huge amount of time and effort, Stalham could never get the boat and engine to perform as he would like, although it did give occasional glimpses of its true potential. It is a true measure of his skill that when he described the engine in the Model Engineer during September 1954, he admitted that there were no drawings, as one of his two ‘pet hates’ was drawing, so ‘the complete finished job had to be visualised before a start could be made. Stalham’s other pet hate was woodwork, which is why the motor was ‘hewn from solid chunks of duralumin’ rather than making patterns and castings. It might also help explain why he asked Dr Hewlett to build hulls for him.

This innate design ability carried over into his other interests, and one fascinating project he was involved in until a few weeks before his death was an attempt to build a human powered helicopter. With contra rotating blades some 10-12ft in diameter powered by a foot operated rocker bar, Stalham had succeeded in getting the machine to lift a few inches off the ground, but not with him onboard. None of this engineering came from extensive workshop facilities however, as he operated from a lean-to on the side of the house, equipped with a Gamage’s lathe. His motors and other projects are a testament to the skill, ingenuity, and perseverance of a superb engineer.

Sadly, by the early 60s, his health was declining, and Bert Stalham died in 1965. He maintained that 'he would have died years before he did, but for family friend, Dr Hewlett. Unfortunately all but one of his boats have disappeared in the intervening forty or so years, but the photo of the vee twin on the cover of ME for Sept 16th 1954 is a constant reminder of one of the finest pieces of tethered hydroplane engineering ever, and is instantly recognisable as ‘Stalham’s vee twin’. It was therefore a great personal pleasure for OTW to discover that the twin had survived and that we were instrumental in having it displayed at Alexandra Palace sixty years after its first appearance at the ME Exhibition.

Competitors from around the country came to King's Lynn for the regattas, including the record holders in all three national classes. In the 55 event, George Lines finished first, Dickie Phillips second, and John Benson third. Another regatta was held in 1956 with Phillips and 'Foz 2' beating Ken Hyder and George Lines, but this seems to have been the swansong of the Club. Following his retirement, Dr Hewlett moved up to the North Norfolk coast, where he became very involved with running the preserved steam railway in Sheringham until his death in 1994.

We are indebted to Trevor  and Linda Chapman and the late George Chapman for most of the original photos in these three articles and the opportunity to meet George and photograph the various boats and engines from the King's Lynn Club that have survived. Also to Jack Steward who recognised our appeal for information on a Radio Norfolk phone in and Peter Hill whose initial contact with the Chapman family set the whole thing in motion.