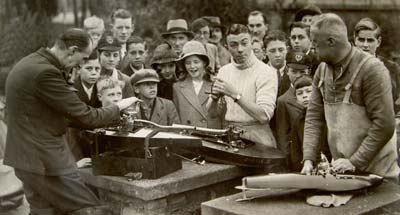 Whereas  George and Bert were concentrating on four-stroke engines at the time, John put all his efforts into developing two-strokes. In January 1938, English Mechanics magazine published an article featuring ‘some fine examples of IC engines and boats seen in the Norwich area’. One of these was a ‘graceful little craft’ 'Lyn' made during 1937 by John Duffield of Brancaster in North Norfolk. He  had carried on with the King's Lynn tradition of naming boats after wives and girlfriends by calling his boat ‘Lyn’, having married Evelyn (Eve) Emerson in 1936.

The Second World War saw John Duffield joining the Navy, serving as an officer on a variety of ships, including a corvette where he was second in command. He was also based in Iceland for a while probably acting as a liaison officer between the British and US Navy.  At the end of hostilities he returned to Brancaster to run the shop for a while, but also seems to have been involved in government work that entailed visiting airfields in the area. Eve became secretary to the Earl of Leicester at Holkham Hall, which enabled them to move to accommodation on the Holkham Estate. All this activity curtailed his modelling severely, but he managed to continue development work on ‘Lyn’s’ engine. With a new magnesium cylinder head to take the newly introduced glow plug and a new induction system with peripheral jet venturi to run on methanol, the original engine was transformed, but it struggled against the radially ported 'Sparky' type motors that began to dominate the 15cc 'B' class.

Subsequently it has been discovered that John Duffield spent much of his time on leave from the Merchant Navy with Andrew Rankine up in Scotland. Rankine had achieved a great deal of success with his innovative two-stroke motors in 'Oigh Alba'. This may well explain why Duffield was so enthusiastic about this type of engine and why he incorporated so many interesting ideas in his own motors. He started by using a steel rear rotary disc valve with large and long duration port opening, and maximised scavenging of the cast aluminium crankcase by padding the crankshaft. He then arranged for two transfer passages in the cast iron cylinder, one at each side, with windows in the piston skirt and a pair of exhaust ports at the front and rear of the engine. This gave true loop scavenging and a forerunner of the very precise schnuerle porting.

The engine was very effective, but in order to improve it still further a new and large venturi was made. The needle adjustment system was refined even further with 75 ‘clicks’ per rev, geared down 3:1. Imagine 225 ‘clicks’ to one turn of the needle. That is ‘fine adjustment’. A strangler was still retained for starting the engine.

Apart from new engine mounts being made for successive boats, this is how the motor remained until 1948 when John Duffield gave the engine another makeover and abandoned the spark ignition system in favour of a glow plug. A new magnesium cylinder head was made, with a better combustion chamber shape to take advantage of the smaller diameter of the glow plug. The Rotary valve and disc was rebuilt with a new cast backplate and a thick tufnol disc running on a steel spigot. The inlet tract was very large at a shade under ½" and the opening period massive.

A new peripheral jet venturi followed the latest trend on high performance speed motors. With the deep backplate and thick disc, recessed for the big end, crankcase compression was maximised. In this state of tune the engine was competitive, but could not match the outright speed of the George Lines’ Sparky. John's approach to overcoming this speed deficit was a prime example of what set the King's Lynn group apart with three of them embarking on radical pieces of design and engineering involving supercharging.

In January 1936, Professor Chaddock and John Innocent addressed a meeting of MPBA members, speaking for and against the ‘practice of supercharging’ internal combustion engines. From 1908 until well into the 30s, IC engines had to play second fiddle to flash steam in terms of outright speed. Supercharging was not a new idea having been used in full sized practice for years, but here it was being suggested as a realistic option for small racing engines. Chaddock built and described his own eccentric vane ‘blower’ in a series of articles in the ME, but up in North Norfolk the idea stirred the imagination of the three enthusiasts. It started with a comment in ‘Marine Modelling’ that a Dr Hewlett of Kings Lynn was building a supercharged hydroplane engine, although nothing further seems to have been mentioned about this motor. It also provided the impetus for one of the most instantly recognisable tethered hydroplane motors ever, Bert Stalham's supercharged Vee twin four stroke.

With no crankcase induction, the crank bearings and supercharger drive bearings would have no lubrication at all. To overcome this, a bleed was taken from the end of the plenum chamber that force-fed oil from a sealed tank to front and rear bearings. A needle valve was used to adjust the flow of oil to the bearings.

Numerous records of the Stalham vee twin in action exist, but nothing about the Duffield motor, which begs the question as to whether it ever fired in anger. It would seem that there was a fundamental problem with the design. As there was no natural induction to the engine, and with the drag of the two discs and the five vanes in the supercharger, it is questionable if the motor could be spun fast enough to get sufficient  charge into the cylinder to start it, given the minimal time the ports in the discs were open. One can see that the motor might run quite happily and effectively once it was started, but that starting might well be nigh impossible.  Eventually the supercharger was discarded, and the engine re-ported to run with a front rotary disc valve, venturi and needle valve. In this form the engine did run very effectively. The cylinder now has a more conventional set of transfer ports above the original ones and a schnuerle type boost port opposite the exhaust. The oiling system is retained with pressure provided by a slotted rotary valve at the rear of the engine.

John Duffield also built another boat and engine, but this time, much smaller, probably for the stillborn 7.5cc class. The exact capacity is not known, but the entire layout is quite different to anything else he produced, with the engine at the rear driving a magneto and transfer gears at the front. The last record of this boat running was at the 1947 International Regatta in June, when it reached a speed of 25 mph.

The split single engine has vanished, but the smallest of the boats and engines that Duffield built has survived (above) and was again acquired by Peter Hill, who took it to the Grand and International regattas in 1987. Although the engine ran well, it did not make any runs, due problems with the complicated drive train. After a few more attempted outings, the boat was displayed at the Pitsea museum until that closed. The boat is now in a private collection. The earlier hulls were presumably broken up but the first engine that John Duffield built in the 30s, along with a later 10cc motor as yet unidentified, passed to Gordon Counsell.

The first run at around 45mph showed that there was not too much wrong and a second run some 10mph faster gave every prospect of the boat running successfully again in the future. Photo below right shows the engine as it is currently, with the pressurised lubrication system for the crank bearings.

Thanks to Doug Etridge for the photo Left.

During the 2008 ‘centenary season', Lynn Blowers ran ‘Lyn III’ at several regattas, winning the Peter Lambert Memorial Trophy for the fastest speed recorded during the season by a vintage hydroplane, and qualifying for the Mears Trophy by completing a run of 1000 yds.

Having seen 'Lyn 4' running at St Albans, Pierre Barbotin asked if it would be possible to have some vintage boats at the International Regatta he was organising. The Duffield boat needed extensive re-gluing after another high speed run at Rowden in 2009 that secured the Lambert Trophy for the second time also revealed the brittle nature of sixty year old adhesive. Conditions were ideal on the French lake where the boat rode perfectly for lap after lap to record its fastest speed to date. As well as winning the award for the fastest vintage boat, by a strange quirk of fate it also won the B Class. Jim Free captured this series of images showing how well the boat was running.

It was to be a return trip to Chatellerault and the World Championships in 2011 that was to be a fitting highlight in the career of John Duffield's boat. Picking up the local paper in the hotel when we arrived, it was something of a surprise to see a photo of 'Lyn III' during a run the previous year being used to promote the Championship meeting. The surprises continued when we found that this same image was on every official piece of paper, entry sheets, competitor’s badges and results sheets. If this was not exposure enough, Lynn was to give a demo run each day at the end of the meeting immediately following the conclusion of the A3 class. Happily the engineering skills of John Duffield and woodworking skills of George Chapman all those years ago were up to the task with the boat performing faultlessly each day. It was a bit nerve wracking though with all the attendant publicity.

This was not the end of the surprises though, as Pierre Barbotin had asked Lynn to take her boat to the presentation, and pointed out that there was no negotiation, the only answer was yes. As her boat had been featured on all the promotional material NAVIGA President Dieter Matysik presented her with a 6ft high advertising banner, signed by all the competitors and organisers. Each of the competitors and organisers were then presented with bottles of wine again featuring the vintage boat. Talk about maximum exposure, but to see such an old boat running perfectly lap after lap at a World Championship would be hard to beat as an experience.

There is no doubt that modern props have proved a key element in running the two vintage boats, but also shows up the Achilles heel of these older designs. The wide flat hulls ride perfectly at more modest speeds but have a habit of taking off if these are exceeded. 'Lynn 4' exhibited this trait twice, most spectacularly at the St Alban's International while it brought about the ultimate demise of Lyn III at Rowden in 2013. Having completed a run as fast as it had ever been it continued to speed up until it was approaching 70mph and the inevitable occurred. Luckily all the pieces were retrieved from the lake enabling the hull to be rebuilt although now it is a very delicate 'old lady' and as such, officially retired.

Thanks are due to John DeMott for the loan of John Duffield’s boat and engine and Peter Hill for the earlier motor and the timely provision of photos detailing boats and engines from the Kings Lynn group.