They Do Different In Norfolk 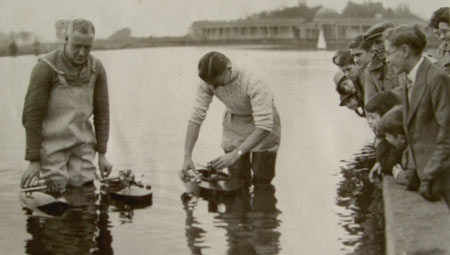 The ‘Lone Hands’ Of King's Lynn

It is a well known saying in this neck of the woods that 'they do different in Norfolk' and this 70-year-old photograph  introduces a series of articles illustrating just how true this was in relation to the select membership of the King's Lynn Club. On the left of the picture taken at Eaton Park Norwich around 1937, is John Duffield, with ‘Lyn I’ and Bert Stalham’s ‘THA’ and in the centre, George Chapman with ‘Bobsie III'.

Both the motor in ‘Lyn’ and the later supercharged engine that John Duffield built have survived, but what was not appreciated at first, was that George Chapman was also responsible for building the last of John’s boats.   Even better was the news that George was still taking an active interest at the grand age of 96 years old. Thanks to George’s son Trevor, who has supplied us with a series of superb photographs, and a great deal of personal information, OTW is pleased to be able to complete the story of the King’s Lynn stalwarts and the superb engineering that emanated from North Norfolk.

Each of the tethered hydroplane enthusiasts from the King's Lynn Club claimed that because of their geographic location so far removed from the centres of hydroplane racing, they were ploughing ‘a lonely furrow’.  It is appropriate therefore, that the last article celebrating 100 years of tethered hydroplane racing should pay tribute to our most senior competitor, George Chapman, and through him, the amazing engines and boats produced by the ‘lone hands’ of King's Lynn, ploughing their collective ‘lone furrows’.

George probably became acquainted with Bert Stalham when Bert, who was an electrical engineer, installed power in the Chapman family home. Although George had been apprenticed as a carpenter and was working for building firms, he was interested in all things mechanical and started to go and watch Bert flying his model planes. He quickly became involved, flying his own plane with an engine that Bert had given him, possibly a Stuart. Within a couple of years, George had turned his attention to tethered hydroplanes, and as they shared interests, Bert soon joined him in this new modelling pursuit.

With the outbreak of war, building work stopped almost overnight and George became a grinder at Cooper Roller Bearings in King's Lynn, returning in 1945 to building with local companies as a carpenter and foreman. With hydroplane racing suspended for the duration, there had been little development with boats and engines, but this was to change very quickly, especially in King's Lynn.

The most obvious feature of the engine, and one that caused much comment, was the four silencers, arranged in pairs either side of the cylinder. In his report, Edgar Westbury comments on the ‘painstaking work’ but then criticises the level of cleaning and polishing that had been done. He also questioned the wisdom of the four exhausts, not realising that these were a carefully considered part of the design. George was asked about this on several occasions and maintained that they were ‘tuned pipes’ that were being talked about at that time, and anyway, it went better with four than with two, so they were ‘tuned’! Another feature, common to other King's Lynn engines was that the cylinder and head were square.

George recalls that he had managed to obtain some very thin plywood from a local wood yard that had been the packing for other timber products. Using some of this ply, he put his boat building skills to work to produce a very attractive and light hull with integral sponsons that was christened ‘Wishbone’.

Like many other boats, the engine is mounted on plates that bolt through the sides of the hull to make a very strong structure. With the hull skins pinned and glued and a hardwood trim along the deck line, the varnished finish shows the true quality of the construction to the very best advantage. ‘Wishbone’ and Duffield's ‘Lyn III’ are very similar in shape, although there are noticeable differences between the two boats. The most obvious being that George’s boat has a substantial skeg mounted on the transom, putting the prop well behind the boat, while ‘Lyn’ has the skeg underneath the hull.

As a postscript, Trevor very kindly allowed the 'Wishbone' to be exhibited on the Model Hydroplane Club stand at the 2013 ME Exhibition at Alexandra Palace some sixty years after the engine had first appeared at the Royal Horticultural Halls.