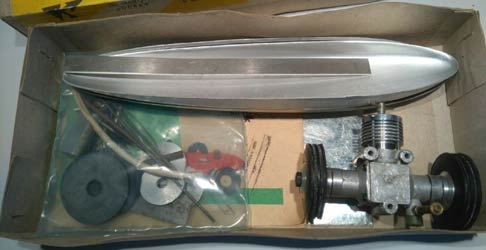 I have been requested to provide some insight into the history of the main production of Russian model tethered cars and engines, and hope that you will find this article about them interesting and informative for lovers of these model sport items.

4) Below: TEMP 1 model car in a boxed kit including a TEMP Mk 2 engine. Production of these started around 1974, finishing in the 1990s, and it came in a softer cardboard box than the earlier version, with the red and yellow label.

Only the TEMP 1 car kits were complete with a twinshaft engine, for which the TEMP Mk 1 and Mk 2 diesels were specifically developed. Popularity of the E-2 class competitions lead to DOSAAF introducing a separate section within this class called TEMP and solely for cars made from the TEMP 1 kit set, which met the specification for E-2. Speeds on the track ranged from 100 to 130 kph, depending much upon the degree of engine tuning. A standard layout model is shown on the left here.

Like Lego, the TEMP 1 set has the possibility to create various options and configurations, including moving the front wheels forward in a basic way as illustrated in the assembly diagram in the kit instruction booklet, as shown in the image to the right.

According to (unreliable) information, at Russian competitions TEMP 1 cars achieved speeds of up to 150kph…………

Next, we shall explore the different kinds of TEMP twinshaft engines and the RITM aircraft engines from which they were derived. RITM Aircraft Engines: The RITM 2.5cc aircraft diesel was designed by the Russian control line team race competitor Krasnorouski of Kiev in the Ukraine. It was much influenced by the British Oliver Tiger and ETA 15 engines. The original production version appeared from the DOSAAF plant in 1962. It was a rear drum version of the Oliver Tiger, with a bore, stroke and piston/cylinder set up that very closely followed this engine. RITM Mk 1, the very first 1962 version, had 4 transfer ports as slots in the cylinder, a 3mm diameter carburettor intake and 4 head bolts, usually with a plain cylinder muff or red or green anodised, but also some other colours are seen. RITM Mk 2 had 4 port holes in the cylinder and 4 head bolts, usually with a green cylinder muff but also some other colours. RITM Mk 3 had 2 ports machined into the cylinder itself and 4 head bolts. RITM Mk 4 Model M was the final version, with a 2 port set up similar to American COX engines, a plastic venturi insert and 3 cylinder head bolts instead of 4.

METEOR and KMD Russian twinshaft car engines are also occasionally seen on eBay or YouTube, with aero engine style mounting only, like the EUREKA, via the standard lugs and 4 holes. Further research for reliable information is needed before a clear and accurate history and description of these can be presented.

For 2019 a new class was proposed, based on a direct drive 2.5cc motor, either one of the many commercial twinshafts or with wheels attached directly to the crankshaft of a single ender. A clutch can be be added between the motor and the wheel if desired. Rytm, Eureka and KMD twinshafts are freely available and there are regular ads for suitable cars from the Baltic States and beyond, such as these examples below.

Above left: various designs built on different home-made pans and bodies. Above right: the two readily available twinshaft motors, RYTM and Eureka plus a scale period Fl car. Oliver "Maserati" with a replica Jaguar twin-shaft fitted, plus a wooden bodied car that 'with a bit of detailing'  could easily be  turned into a 1950's Fl car. This has the cylinder to the rear and the small Tee-bar is used to adjust the compression.