Oliver Monk
A bit of a saga 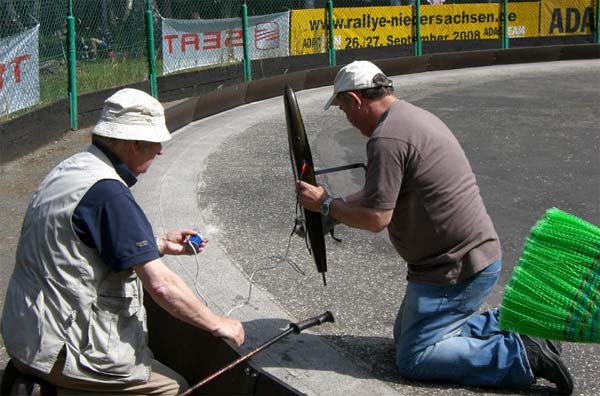 It all started around 2010. I had been running a 10cc car for a few years and was enjoying the racing. The 10cc cars are always last to run so it seemed a good idea to have a morning car. The 1.5cc cars seemed a bit small, I didn’t fancy a Class 3b car so I settled on a 2.5cc car. You will see from this picture that my hair is still dark.

About that time Mart Sepp advertised a new range of tether cars for sale on "speedmodelcar". I contacted Mart and ordered one, the next problem was an engine and pipe. I ended up turning round a Picco 15 and for the pipe I copied Horst Denneler's 2.5cc pipe. The car got its first run in Kapfenhardt 2011, it went round, and did a speed of 179.4 kph. Its next outing was Tallinn in the same year, 166kph. At the time I was still racing my 10cc car and the 2.5cc car very much played second fiddle and it was also a bit of a disappointment around a 100kph short of where I wanted it to be.

A bit of light appeared at the end of the tunnel, Horst Denneler had some 2.5cc Picco based engines made, I bought one of those and fitted it to the car. From my notes, I am not very good at putting the dates in but the car with the Denneler engine had its first run in September 2011 at the Orebro track, it achieved 222kph, a big step forward. That was its last outing of that year although I raced the 10cc car in Lyon.

The shut-off in the car is a flood-off type, you only get one chance per run. Note the external vent on the tank, Mats Bohlin's influence. Mats had taken me and my 10cc car under his wing and I was at last making progress with the 10cc car. I ignored one bit of his advice, don’t run 2.5cc cars, they are difficult.

The 2.5cc car got its first outing at Kapfenhardt 2012. It did 2 runs, the best being 234kph and one run too rich. I probably didn’t put much effort into this car, I broke the British 10cc record twice that weekend.

According to my notes I changed the balance of the car and changed the pipe length. Next outing was Vilnius, the modifications worked, 245 kph first run and 38,815 rpm, getting somewhere. For the second run bigger tyres, it blew the plug and the third run it did 258.73kph with a couple of laps at 260kph, 39,185rpm. I was happy, and I managed 100.35 kph in the horsing competition and placed 15th.

The last race of the season was Orebro. It was cold, 8°C, and wet and the car didn’t like it, blew plugs. I put on smaller tyres and altered the compression. The best I got out of it was 249.673kph.

Over the winter of 2012/13 I made a new, conventional shut off for the car (above) that would give me the option of being able to shut the car off, change the setting and push it off again, unlike the flood-off version it had.

Also, I put a new front end on the Denneler engine, the crankshaft didn’t spin freely in the bearings as there was a tiny amount of misalignment. The new front end cured it, I also bought a spare engine.

The first race of the 2013 was Kapfenhardt. The car managed runs of 211 and 239kph and new liner piston required.

Tallinn was not much better, 245kph, and onto Basel, 235kph, it's just getting worse.

For the race in Hannover I had bought an aluminium Stelling pipe. I ran both the old and new engines, both ran within 1 kph of each other in practice, best the car managed 242kph.

In the mean-time I had bought a new 3.5cc Sepp car with a  Novarossi turned round by Stelling.

We had taken our son Aaron to his first race as a spectator. I paid for his flight and hotel and told him he had a to buy his own beer. He enjoyed it and was made very welcome by the tether car community.

I had bought an old Stan Barrett 1.5cc tether car and spent a lot of the winter rebuilding it. You will notice it has Aaron's racing number on it, but that’s another story. I also made gadgets but did nothing on the 2.5cc car.

I am still running the 10cc car, the 2.5cc car did 243.78kph in round 1. The second round it was rich and the third the timing system failed, I was offered another run but didn’t take it.

Kapfenhardt- I ran the newer 2nd engine, I have written quite a bit in my note book, the gist of it is that it accelerates up to speed, then slows down. It did it all three runs, best speed 236kph and it was rich. I bought a Gado 2.5cc engine and a spare liner piston.

Vilnius- I ran the car in practice but found metal in the head. The 3.5cc car went well for the first time, 234.4kph new British record. On the second run of the 2.5cc car it would not go over 170kph. I had the exhaust timing at 197.3 degrees, maybe too much. I rebuilt the No1 engine after the race with more modest exhaust timing, 195.6 degrees.

Pila- neither of my cars would run would run well the best was the 3.5cc car at 235kph. The highlight was Aaron winning the 1.5cc class Grand Slam prize in his first season, a return ticket to Australia.

After the race I made two steel pipes for the 2.5cc car and reduced the exhaust timing to 192 degrees.

The last race of the season was Tallinn. The car did two runs, one of 229 and a 244kph, still stuck in a rut. I placed 3rd in the 3.5cc class very happy with that result. Tallinn is very competitive for the small classes.

Our first races of 2015 were in Australia and I used the same setup in the 2.5cc car as I ended the European season with. It was no surprise that it did the same. On the return from Australia I fitted the Gado engine to my 2.5cc car.

2015 Kapfenhardt, the first run with the Gado engine and a Gabor design pipe gave 225kph the second run 240kph but rich.

In Pila that year I only ran the 3.5cc car I cannot remember why.

Basel was the next race for the 2.5cc car. I only have a record of a run at 223kph I was trying reduced diameter vent pipes on the tank.

Over the winter of 2015/16 I built a new 2.5cc car with the Gado engine in and put the Denneler engine back into my old 2.5cc car. The plan, two cars twice the development in half the time. The second picture is before the car got painted.

Tallinn with the new car. I did three runs in training trying different tyre sizes, all around 220kph. In the race I did 228kph.

Pila World Championships. First round 221kph second 225kph and third 224kph at least its consistent but where has the speed gone?

Basel. Back to the two car attack and I had finally managed to get a second hand Stelling 2.5cc engine, which was a bit tired, that went into the old car. Well, the speed was back, the old car did 253.8kph with the Stelling engine and the new car 225kph.

Pecs Hungary. Only managed 248kph in training and 230kph in the race. The car was hard to horse with the engine being so tired. That was the last race of the season but the speed had come back using the Stelling engine.

Hannover May 2017. The first run in training with the old car and the basket case Stelling, the big end seized. It sounded good and was accelerating fast.

Stryi for the European Championships the old car with the Stelling engine did 243kph, 240kph and the last run was very rich.

On one of the days Edvard Stelling offered to show Juri and myself how to set up one of his 2.5cc engines. He spent nearly an hour with us, it was time very well spent. Again, with Juri we had another training session with a past Russian champion on setting engines up. It’s a good job Juri is multi lingual.

Basel August. New car with a properly set up but tired Stelling engine did 255kph in practice and the old car with the other Stelling did not run. The new car did 256kph during the race, at last on the right track.

After this race I retired the old 2.5cc car and decided I would run the car I built.

September Pila Poland. First training run it did 251kph, first run on Saturday stopped at 230kph, suspension problem and on Sunday it did 248.77kph. It appeared to be lean and the piston was hitting the head.

That was the last race of the season I was feeling a lot more positive about the new car, the old car was to stay retired pending a rebuild.

During the winter I made gismos to measure the head volume bought a digital gauge for setting squish band clearances and tried a new way of making heads.

I made an oldtimer car and did a bit more on my steam engine but most important I made a lot of pistons for 1.5cc, 2.5cc and 3.5cc engines for me and Aaron. For a bit of fun, a pulse jet controline model

Kapfenhardt 2018. It was a bit of a disaster, the car ran but it would not accelerate, too rich, then the front tank bracket failed, that was it for the race. Good job the 3.5cc car went, it did 272kph with one of my pistons, pleased with that.

Tallinn. I did three rich runs in training and one lean run. First round the car was lean, stopped and needle reset, would not restart. It did the same in the second round not a good start to the season.

Back at home with the European Champs looming, the only major change I had done was change the glowplug to the taper seat type, l could not get any of the top hat type. I ran the engine on my test rig, whatever I did, it would not do over 16,000rpm. In the mean time I made a head to suit the glowbee taper seat plugs. I had also managed to get some top hat plugs, back to the test rig, both types of plug did over 22,000rpm and sounded crisp and ready to take the next step up on the pipe. I also changed the balance of the car to lean it out a little.

Hannover European Championships. Training was by class segments so I ran the 2.5cc car first, it made 240kph and the glowplug was scrambled.

I ran the 3.5cc car next and that would not get up to speed, tried different needle settings no joy. I missed second practice with the 2.5cc as I was working on my best hope, the 3.5cc car. With smaller tyres and a return to the original needle setting I ran it again, shut it down at 262kph still accelerating.

To break the record, it took 2 cars, 4 different makes of engines, 5 different pipes and a lot of help, feed back from the horsers as they are the only ones who can hear the engine running, lots of good and not so good advice from the other racers. 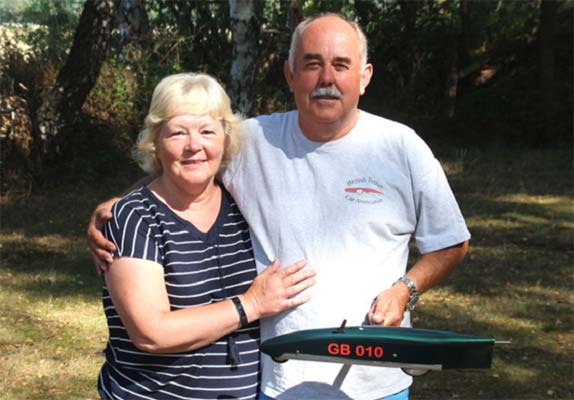 Running these 2.5cc cars for around 7 years has sent me grey.

Thanks to Oliver for this fascinating insight into just what it takes to reach such a goal. Detailed accounts of all the work he has carried out on his cars, engines and other projects, as well as machining and other very helpful information can be found in his extensive 'Workshop Ramblings'.