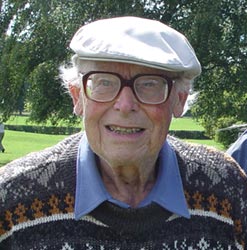 With the death of John, we have lost the last link with tethered hydroplane racing from the 1930s. It is amazing to consider that he started in model boating almost exactly eighty years ago and was active through to the end of the 2014 season, a record that is unlikely to be equalled. It was always a delight to talk to John as he was able to provide us with details of boats and personalities that were impossible to ascertain elsewhere. Although the legacy of a knee injury sustained many years ago eventually prevented him from getting into the water he still took an active part in the running of his Orthon 30cc boat and was still working on a new engine until quite recently. For a period of ten years or so he was the driving force behind the re-formed MPBA and provided most of the hydroplane related material in Model Engineer. His knowledge of the post war era, especially relating to Blackheath was encyclopaedic, and if there were any names he was unsure of, Joan was sure to come up with them, usually embellished with personal insights that never made it into print at the time.

The loss of John Benson will be felt throughout the model boating community as where we are now owes so much to what he did in the past and our condolences go the the Benson family. It would be an invidious task to try and detail John's  exceedingly long and successful career with tethered hydros and straight runners so we feel that it is appropriate that this should be done via an article that he prepared for us for the centenary year in 2008.

John Benson on his long career

With the resumption of official activities in 1946, E.T. Westbury stated at a committee meeting that he would like to retire soon and at the 1948 A.G.M. I was made Hon. Secretary with Alan as Assistant.  Alan was a tower of strength and among other things ran Club Championship for several years, publishing the results each year in  the “Model Engineer”.

My service continued –1948 Hon. Secretary—1958 Hon. Competition Sec. and Treasurer—later Hon. Treasurer only until retirement in 1980.

My first hydroplanes were constructed about 1938 and strongly influenced by Joe Jepson who was a flash steam enthusiast.  Two boats were built but neither of these were successful the chief problem being the cooling of the flash boiler due to erratic blowlamp performance.

I was appointed as lecturer in engineering at Cambridge College of Arts and Technology in Sept. 1957 and this made hydroplane development more difficult due to the absence of any suitable water to operate the circular course since testing had to be done at Regattas during the run.

Thanks to the support of my family I still manage to attend a few hydroplane meetings each year and at present am building a new 30 cc engine of the Schnuerle ported type.

Talking to John is always a pleasure and rewarding, with additional pieces of information forthcoming which are added here.

Many thanks to John Benson for text and photo's, and to Phil Abbot and the Westbury family for additional photo's.