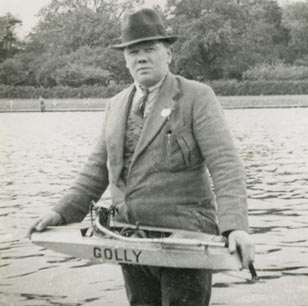 Whilst there have been many sizeable contributions to the world of tethered hydroplane racing over the last 100 years there can be no doubt that for a period of 20 years, those of Edgar T Westbury were the most extensive and significant. His name is irrevocably associated with an untold number of constructional, descriptive and general hydro related articles in Model Engineer, designs for engines and boats along with numerous accessories, as well as regatta reports and photographs. The views he expressed and some of his design principles did not always meet with universal acceptance, but this should not detract from his outright enthusiasm for, and desire to promote tethered hydroplane racing, especially through his time with the Model Power Boat Association.

It was also in 1925 that Westbury produced the first of his many IC engine designs that would eventually see service in tethered hydroplanes throughout his lifetime and even well into the 1990s. The late Vic Collins holds the record for the fastest four-stroke engined hydro in this country, which used a motor of Westbury origins. Initially, Westbury’s main interest was the miniaturisation of ignition systems for the small IC motors that were already well established by the mid 20s. With his designs, he also endeavoured to improve performance, reduce weight and improve reliability. He always claimed that while his own boats were never the quickest, most of his successes were down to completing the runs where others had failed.

Apart from his own enthusiasm, it does seem as if Westbury’s move into running tethered hydroplanes competitively was in response to him being challenged? There is a clue in an article published in ME in August 1930 where he acknowledges that he has his critics and detractors. He states, "One of the penalties one has to pay for setting up as a public oracle is that one is expected to uphold one’s reputation against all comers." He goes on to say that he is ‘accustomed to being addressed to this effect, either verbally or in writing’ along the lines of ‘You’re a good hand at giving away information on how to build engines for speedboats, but when are you going to set us a good example by winning the International?’ This may also explain how he became involved with the South London Model and Experimental Power Boat Club whilst still living at Aston Clinton, as one of his more vocal critics was SLEMPBC member and long time contributor to Model Engineer, Lionel (John) French.

Westbury does defend himself by offering ‘some explanation - or excuses’. He admitted to knowing nothing about hull design, which he considered to be at least as important as the motor, if not more so. He also commented that there was no suitable water within easy travelling distance. The first indication of what was to follow was a statement that "I have some hopes of doing a bit with a real speedboat of my own design and construction some day."

However, his name did appear in the results finishing the 500-yard round the pole race in 79 seconds, a fraction under 13mph. One second behind was Ted Vanner with Leda V, whilst Gems Suzor won the race at 26mph. Westbury attributed the slowness of his run to leaves round the prop and skeg, a regular autumnal problem at Victoria.

The hull of ‘Miss Halton’ was designed on the lines of a boat called ‘Newg II’. After being used for experiments during which it suffered many crashes, capsizes repairs and rebuilds, it was superseded by Miss Halton II. The second version was built by H A Cox, a well-known designer and contributor to Model Engineer, and based on the lines of the 15ft Bulldog racing boat built by the Brooke Company in Lowestoft. It was described in Model Engineer in 1934. Even this boat had something of a chequered career, snapping the line on its very first run and smashing into the concrete edging of the pond. Cox maintained that it was never quite the same boat after the repairs that Westbury was forced to make. Even so it was an improvement on the previous version, managing just over 20mph.

This was really the end to the first part of Westbury’s involvement with tethered hydroplanes as he left his post at Halton in 1932 to become Technical Assistant to Percival Marshall at Model Engineer, a post he was to hold until 1945 when he became Technical Editor.

The brief statement about his personal circumstances disguises the true depth of the disruption to his life, which started with a move from Aston Clinton to take up the new post, closely followed by the death of his wife Winfred in 1934, leaving him with two young children. Eventually he settled in Brixton where the Westbury family was to remain until the attention of the Luftwaffe determined otherwise. By 1935, life had returned to something like normality as he had remarried.