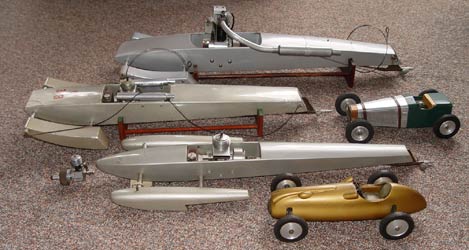 From what Gwyneth has told us and from what we have garnered from other sources it would appear that the two deaths in quick succession left her and her brother in a difficult situation, with only one of them on hand to sort out the complicated family affairs. It was certainly intended that Arthur’s cars, boats, engines and other models should stay with the family, yet for a variety of reasons, this did not happen. The hydroplane that won the Willis Cup at the 1974 ME Exhibition and much admired by one half of OTW that year joined the collection of Arthur Cockman, a long time friend and fellow competitor from Victoria.

A number of Arthur’s cars were on loan at the Stratford on Avon Motor Museum until the 28th February 1990 when the display case they were in was broken into and they were stolen, shortly before the museum closed permanently. The cars stolen were the number 3 ERA tethered car, the Hotchkiss and Sunbeam rail cars and the large Cooper Bristol that was missing its ETA motor. These have vanished without trace and not reappeared in the intervening years, although they would be instantly recognisable. Other cars, including the magnificent Sunbeam record breaker, and Cooper Bristol railcar, became part of the collection of long time associate and friend from Arthur’s time in Eccleshall, Gerry Buck from nearby Endon.

As well as the cars there were many of Arthur’s own and AMCO development engines, including the part finished Vee twin that has appeared in so many illustrations, and another hydro. A third hydro and more AMCO material was passed to Tony Taylor in Stafford who helped move Arthur and Mary down to Wales, whilst other items went to a nephew.

This boat was the first example of Arthur's work that we saw in the flesh, back in 1974 at the ME exhibition. Although the show catalogue we saw recently lists it as 'Gwyneth' the contemporary reports name it as 'Wizard of Oz', which it has been called ever since, until 2016 when we learned of its true identity from Gwyneth.

More recently, hydro historian Peter Hill heard mention of a hydroplane having been found that was believed to be an Arthur Weaver hull. This was not a complete surprise as he had been sent pictures of one several years earlier from a collector in Bolton, but with no further details forthcoming it was not known if it was the same boat. In conversations we speculated whether it might be an early ‘Wizard of Oz’ or ‘Fleche D’Or’, but then all went very quiet for a long while and nothing more was heard of it.

The hull, along with much of the material John Goodall had obtained, confirmed Weaver's connection with AMCO after the establishment of the new company at Alperton. A quick measure of the engine mounts and the odd positioning of the fuel knock-off, still with tube attached, established that the boat had been built for a standard AMCO 3.5 BB, something of an unusual choice for the 5cc class?

Subsequently it transpired that this was the boat given to Tony Taylor around 1968/9, and as this was not the one in the photos sent to Peter all those years ago it indicated that there was certainly another Weaver hydro in existence, and even better, its location was known.

This posed an interesting challenge for OTW. We knew where both the hull and motor were, and knew both owners, so was there any possibility of reuniting the two items? However, after publishing a photo of the boat in Pitbox and suggesting the possibility to him, the owner of the hull indicated that he might be willing to part with it. Halfway there! At the Midland Exhibition we outlined the situation to John Goodall, for his thoughts. As far as OTW was concerned, the prime purpose was to get the engine and boat back together.

After negotiation, it was agreed that John would purchase the hull and make arrangements to collect it. At that stage a degree of nervousness crept in, as someone else was now taking the risk that our observations and thoughts might not be correct. Eventually John travelled up to Lancashire, and to our relief, found that his engine fitted Alan’s hull perfectly. Alan remarked that it was almost like a 'Time Team revelation' with each bolt lining up, one after the other. The following week John Goodall brought the complete boat down to the Old Warden Swapmeet for our perusal and a photography session.

What is immediately obvious is that apart from the exhaust extensions, there seems to be no provision for silencing so was the boat ever run, or indeed completed? There might be a clue in the position of the hole for the fuel cut off? It is positioned perfectly for a standard AMCO BB, yet the motor has a modified and more conventional rear backplate with a straight venturi. Was the motor removed for these mods and never refitted, or was it another development motor to replace a standard BB?

Thanks to Rohan Cleary for all the photos and David Giles. (Photoshop for the new rear wheel)

The only complete and original railcar of Arthur's that was known to have survived was the Cooper Bristol in Gerry Buck's collection. Gerry's daughter and son in law retained this, along with other Weaver items, until the final 'grand clearout' a few years ago when we first saw it at Old Warden with the remainder of the Buck collection. The quality of workmanship was just amazing and reinforced just why we were so fascinated with what Arthur had produced over the years.

The Delage model below was built by Arthur in 1948/49 and based on the 1926 1.5 litre GP car. The motor is unusual as it is a 1cc, direct drive twinshaft. The 2 inch wheels give scale to this diminutive car, which is only seven inches long. The Delage radiator badge was made by fellow club member Ernie Rhodes, a professional blockmaker. The perfectly formed louvres evident on this car and the plethora of different sized ones on his ERA models were produced by a cutting roller setup that he described in detail in Model cars in 1950.

It would be impossible to calculate just how many engines, cars and boats Arthur Weaver built in his career and happily a few have surfaced and been gathered together for this article, but a large number effectively have vanished. All that exist of these at present are photos in magazines.  Here though are some of the items that have survived but for which we have no further information or documentation.

This article has had the longest gestation period of any we have ever prepared and there are so many people to acknowledge who have made the eventual publication possible.

First and foremost must be to Arthur’s daughter Gwyneth for the wonderful biography, several new lines of research for us to pursue, and constant updates along with numerous original photos. John Goodall has been particularly helpful, giving us unlimited access to all the items in his possession relating to Arthur and providing many of the modern images. Along with Alan Whitehead, John was also party in reuniting one of the hydros with its original motor.

A wonderful gesture from Gerry Buck’s daughter Gill was the donation of Arthur’s personal scrapbook, which runs from 1946 to 1954. Peter Hill, who became the custodian of ‘Gwyneth’ the boat, has provided the leads for the other two hydros, as well as recalling the connection with the Stratford Museum, which he visited in the 1980s. Stan Barrett, Mario Gandolfi, Tony Taylor and Fred Blois for personal memories of Arthur and Mary and original photographs. Eric Offen for recognising and saving NL 1952 and providing reference material, Ken Smith and the Westbury family for original photos.

Postscript: Unbelievably, just before the final part of this article was due to be published, the postman arrived with a box of assorted material that included two important images below. The first is the only photo of a complete and original 'Weaver' Redex Cooper Bristol and the other of Arthur's own version of the same model. What makes these so interesting is that they were both taken within the last 20 years meaning that both these cars have survived although their current whereabouts is as yet unknown, unless anyone can help? The right hand photo was taken by Miquel de Rancougne with parts of his collection in the background.

It has yet to be confirmed how many of these cars Arthur did build, from the articles it indicates at least three, and now we know that three have survived, are there more?

Update Sept 2017:- We were delighted to receive news, details and images of another original REDeX car built by Arthur for Myers representatives around the world. We now have confirmation that at least four of these cars were built and have survived, this one still with its original paintwork and ETA 29 motor.

Update Nov 2017:- Thanks to the sharp eyes of Arthur's daughter, another survivor has been identified. This was also in the 'Spindizzy' collection but not attributed and may well have come from Gerry Buck's collection. It is another railcar, but quite early as it still has the plain rail guides and judging by the flutes in the bonnet is based on a Vauxhall model.

Update August 2020:- Three years on from publishing the previous updates and after several appeals on the website and through Facebook, Arthur's own and distinctive Cooper Bristol has been located. It had apparently been consigned to yet another major auction house, the second time in its recent history. The car remained with the Weaver family until loaned to the Stratford on Avon Motor Museum where it was stolen in 1990. It must have either been recovered or sold on soon after, although it was never returned to the family. Since then we can positively place it for a while with Miquel de Rancougne through a dated photograph and later sold via Christie's in June 2002 for £2390. This was not the sale of his collection, which did not take place until 2004. The car then vanished again until it appeared at Bonham's where it was bought by its present owner, although he cannot recall when or where? It has suffered very little in the intervening thirty years, still without an engine, and in its original green paintwork, although it had gained a racing number prior to 2002. Arthur never did finish his in the REDeX livery.

Our thanks to Murray Smith for contacting us and allowing us to publish his photos of the car as it is currently.