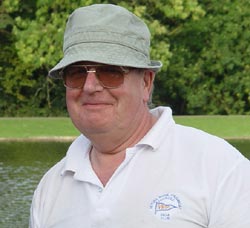 We have only known Terry Everitt for a relatively short while, yet within those few years we have come to appreciate just how deep his involvement was in the world of tethered hydroplanes and on so many levels. From the day he was old enough to get into the water in the early 1950s until ill health curtailed his racing nearly 60 years later Terry was at the forefront of competition, and by his own admission, totally dedicated to going as fast as possible. In an interview with OTW in 2007 he said he started in hydro’s because (he) ‘wanted to compete with his dad’.

In 1964 Terry, along with his dad Bill and Ted Blacknell made the first of his many visits to France to race at Amiens. The regatta was not a great success for any of them and made all the more poignant as Bill Everitt died only a few months later at just 56 years old. Twin brother Colin then became a vital part of the team assisting Terry for many years, as well as running boats up to a couple of years ago.

Having some experience of the boats being used by the continentals, it was not long before Terry, and Colin, were coming up with ideas for hulls that would move the class on, a process that he continued with for many years. Terry spent inordinate amounts of time designing, building and developing boats that would give him an edge, soon expanding this to the engines as well. He was always of the opinion that he could produce a better motor and was planning a Picco beater for much of the time he was unwell and not able to get into his workshop.

Terry was a consummate and enthusiastic engineer who started his working life with an apprenticeship in Mechanical Engineering. He worked for Manifold Machinery Ltd, which was a subsidiary of Thorn Electrical Industries Ltd, - the biggest company in Enfield, whose main production was the manufacture of lamps and televisions, this was as well as day-release to college. At the age of 26 he moved to CEGB Scientific Services, as a Lab Technician. When the electricity supply industry was denationalised Terry transferred to Magnox Electric in their Remote Operations Department as a Build and Development Engineer, until he retired.

His earliest engines were replacements for the ubiquitous McCoy 60s that were the standard wear in the CR class, with the first completed around 1965. The 10cc record breaking motor followed this. The reasoning behind it was simple in that the Italian OPS motor with its Zimmerman disc valve had the exhaust facing the wrong way, so rather than a convoluted tuned pipe with a U bend, he designed a motor with separate front and rear housings so that the exhaust could come out over the flywheel. Turning round commercial front induction motors was also a speciality for Terry and he continued to follow this route, especially with his A2 motors. As well as the 10cc engines he built, a number of 30cc A class motors came out of the workshop, all displaying several elements of lateral thinking in their design. Terry made all his own patterns, while brother Colin was always on hand to assist when the casting process was underway, although Colin told us recently that he was more involved with the building of the hulls.

By all accounts Terry was the first person in this country to seriously address the effect of aerodynamics on tethered hydroplanes as the boat he used at the 1975 World Championships at Welywn, ‘Inter Min’, (below left) demonstrates. We also believe he was the first person to use a rear spoiler, which became standard on all boats, although these were initially little more than tiny aluminium plates. Later his boats would become more conventional, but with little tweaks and design features that were very much his own.

Developing engines is always a time consuming process if it has to be done at regattas and unless you have access to a dynamometer or water brake and very understanding neighbours can be very frustrating as so many other factors come into play once the motor is in a hull. In order to test his 30cc motor, Terry mounted it along with a complete hydro drive train on a baulk of timber to run up in the garden. With no load, this must have been an impressive, if not frightening experience, which Colin confirmed to us.

Several of Terry’s contemporaries share his view that each run should be a potential record, and throughout his career this was certainly his aim, claiming that breaking records ‘gave him the most satisfaction’. He first achieved this as far back as 1963, breaking Ken Hyder’s record with a run at 81.1mph using a McCoy 60, coincidently the last time the American motor would hold a British record. Terry held this record for five years until the arrival of the Italian motors that would dominate for the next 40 plus years.

The 10cc class was always ultra competitive and this record was very short lived, lasting only a matter of weeks, yet despite his constant efforts, Terry would not regain the record for another fifteen years. Now using an OPS, he upped Stu Robinson’s four year old record by 7mph, with the first ever run of over 130mph, which at 131.5mph was also the fastest water screw speed in the world at the time, although he did not claim a world record. This he regarded as ‘his most satisfying run’.

As well as a foray into the A class, Terry was a regular competitor in A2 and the new A/B restricted class when that was adopted. With his experience in the 10cc class, the slightly larger motors soon expanded the number of record to his name, with the A/B record he set in the early 1990s not being beaten until a couple of seasons ago. Although his name did not appear in the lists, Terry also had a crucial input into John Hyder’s new 30cc record, as he did with Ian Berne’s A/S, being ‘prop flicker’ on many occasions, a singularly perilous job before the advent of the starting cord.

Less well publicised, but possibly of more importance to tethered hydroplane racing has been Terry’s untiring work in organising and administering the sport, while supporting and encouraging the development of venues, clubs and participants. From the moment we set up OTW he assisted us with information and material, passing on anything of interest, and pointing out any factual errors. Terry was also the practical link in getting us both on the water and competing regularly. We all owe so much to Terry and Ann, who supported him at every stage in all he did. From the time that the MPBA disciplines were devolved he served as Chairman of the hydroplane section, a position he also held with the Model Hydroplane Club from its inception some forty years ago.

Remarkably, it was not until 2011 that he received his MPBA long service certificate to which he commented ‘about B time too’. Bridle wire, making up tethering lines, machining poles and pole heads, timing gear, supplying drawings, all areas that Terry took on board in addition to his other duties. He could be found at the ME and other exhibitions promoting the sport and supporting those putting the displays together. Recently he and Ann had been arranging the delightful Southern Section lunches, where we could all catch up and anticipate the new season.

Having raced for something like 57 years in up to three classes at a time and as many as 30 regattas a season, Terry’s total of race wins, is incalculable and many of the perpetual trophies feature his name time and time again. It is probably no exaggeration to conclude that he is the most successful tethered hydroplane competitor of the modern era and certain that his work in support of the sport is beyond comparison. Terry Everitt’s death is an incalculable loss to tethered hydroplane racing and all those that knew him.