In May 1913 he set sail for Australia, although his family believe that his final destination was to be New Zealand. According to a letter he sent to Percival Marshall, he was intending to set up a branch of the Belvedere Motor Company, for the sale of his engines. The Belvedere Motor Works continued its existence but now at 6 Penn Road Mews. The company does not seem to have survived the first war however.

Alice and the girls were left behind, and it was planned that they would follow on when he became settled.  The plan was not to work out quite how he had intended though. Arriving in Sydney on 5th June on the SS Militiades, he looked around for a job but even though he was a first class mechanic with a natural gift of adaptability, the first few weeks were hard. ‘There was nothing doing, his slender funds disappeared and he was faced with bills for board and lodging that could not be met.’ With the situation looking very bleak, Smith had a bit of luck at last and found a job in a garage and repair shop, where he stayed for six months. He then found a job in a larger works as a head turner, where he was to remain until around 1920.

He soon established himself with the Sydney Society of Model and Experimental Engineers, exhibiting one of his generating sets at their annual exhibition, early in 1914. His claim to be a Model Engineer was certainly proved to be accurate though as he would build an incredible number of models of varying types over the next few years. On 4th August 1914, England declared war, effectively isolating Smith in Australia. How feasible it would have been for Alice and the children to leave in this situation is not known, but before his family could join him, tragedy struck. After a long period of queuing for food in the winter of 1915, Alice contracted pneumonia and died on the 11th of December.

With their mother dead, arrangements were made for the three girls to join their father in Australia and they sailed out to Sydney with an aunt in 1916. After seven years of work, Smith had saved a little money, and armed with little more than his model engineering tools decided to venture into a manufacturing business of his own. He was well aware of the popularity of the wireless in America and Europe so started making condensers and other wireless components for the Australian market. It would seem that he was working in a partnership of some sort as he traded under the name of Mann and Smith of Hurstville in Sydney. Here he set up a small foundry for producing iron castings which were almost unobtainable at the time. With the other machines he designed there was a sufficient product range by 1923 for an 18 page illustrated catalogue to be published. All went well until a slump meant that demand for these type of products dried up, but being resourceful he set up another business manufacturing screws. The price that was being charged for small brass and other screws seemed far too high and he considered that he could make them much more cheaply.

Late in 1928 he came back to England for a trip that lasted something like 4 months. It was his intention to buy equipment and machinery for his factory in Hurstville. During his time in the UK he visited Percival Marshall in the Model Engineer Offices and reckoned that he would only have to work another couple of years before he could retire and then "devote himself to model engineering".

Marriages were coming in quick succession with second daughter Ethel marrying Victor Cavanagh in 1935 and youngest daughter Jessie marrying Allan Westbrook, a police constable, in 1936. Two years later Smith returned to England for another visit, again meeting up with many of his friends from the worlds of model engineering and boating. In his own words, he worked hard, running the business, producing his own models and indulging himself in one of the many hobbies and interest that seemed to fill his life.

He and his wife had also become very successful breeders and owners of thoroughbred racehorses. Indeed, Mr Mead, their trainer was the only other person aboard the ‘Erani’ during its rescue. In 1947, Anne’s gelding, McKechnie, which she had given her own name to, was showing so much promise that she was offered 1500 guineas for him, which she refused. Another of their very successful horses recalled by family members was Radical.

In June 1948, Smith, now 69, along with his wife Anne came over to England on the SS Orion for an extended trip, with the intention of arranging for replacement machinery and a new car to be shipped out to Australia. Oddly, the ships manifest for this voyage gives Smith’s occupation as a textile manufacturer. During the visit the Smiths stayed for about a week with the O'Connors, W.Js niece and nephew who lived in Summerhill Avenue, Sidcup.

It was during this trip that he made a final visit to Victoria Park with the O’Connors and their son Brian to sail a model yacht that Smith had helped to complete. Smith used this opportunity to look up Edgar Westbury, who described him as "The one and only ‘Belvedere Smith’, a very notable figure in the early days of model power boating, whose experiments in the use of small petrol engines for boat propulsion are now a matter of history." Smith showed Westbury photos of ‘a very fine 4-cylinder engine and gearbox unit and also some small c.i. engines he had constructed.’

Through the unstinting help of Smith’s grandson Phil Westbrook, great grandson Gregg Westbrook and great nephew Brian O’Connor, I have been able to add a great deal more about the life of ‘Belvedere Smith’ than would ever have been possible from the material I had access to. Of the London that Smith would have known, very little exists. His birthplace adjoining Victoria Park has gone as has Harvist Mews where he moved to. The name still exists though as a trading estate.

On a recent trip to Sydney, Gregg Westbrook visited the Power House Museum and was kind enough to photograph a number of items from the W. J. Smith Collection. Below is what we believe to be one of his own engines, although it appears to have a set of aluminium fins replacing the original water jacket.

Amongst the items that relate directly to Smith were the model of a screw cutting machine that he had designed and built for use in his factory. The collection of steam engine models and ancillaries are probably from his time with the Sydney Society of Model Engineers. Much of the collection were commercial items that he had acquired over the years including an early British Ambassador motorcycle.

Included in the images was this model steam loco, but we had no further information about it until a copy of the photo CD from Gregg was despatched to Brian O'Connor, who added this marvellous post script.

My thanks go to everyone who has contributed to this article, both information and photographs. In particular, my appreciation goes to Gregg Westbrook, who provided the catalyst and much of the family related material. Phil Westbrook for reminiscences, Brian O’Connor for documentation and personal memories, Eric Offen and Peter Hill for early records.

Update Dec 2014: Earlier this year we were contacted by Robin Storey who had what turned out to be an original Belvedere motor. This version was slightly different to others seen previously as it appears to have the barrel and head from the air cooled version seen in the adverts, which is attached with three bolts directly to the cylinder flange rather than to the two lugs on the cast bronze water cooled type. A copper water jacket has been fitted at some stage and one of the cooling pipes has been moved. Robin very kindly took his motor apart and photographed it so that the design elements of a 100 year old, atmospheric induction four-stroke could be seen in close-up. Thanks to Robin for these images. 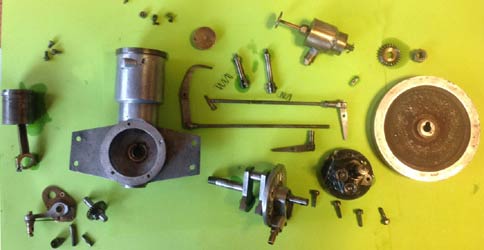 What makes this version of the Belvedere so interesting and sets it apart from the one above is the very early monoblock crankcase with the crankcase, cylinder and horizontal mounts all cast in one piece. This is reminiscent of some of Fred Westmoreland's motors from a similar era, but as yet, it has not been possible to establish any idea of the progression of the design and method of construction. Certainly presented an interesting exercise in pattern and core making.  The one piece crankcase meant that the crankshaft was loaded in from the timing side and then a cover plate, complete with cambox bolted to the open side of the case. The threaded end of the crankshaft would have been for one half of the bevel drive to the propshaft.

This motor was again fitted with an atmospheric inlet valve and cam operated exhaust, but someone has cunningly made the inlet cam operated as well by calculating the exact position of a second cam follower to give the correct timing on the single cam. This meant that the second pushrod was coming out the side of the cambox, so an ingenious lever was added that aligned the extra pushrod with the head. A second rocker stand was also added to the head for the inlet valve. The cylinder head is also interesting in that the compression ratio has been enhanced somewhat by the addition of a crescent shaped packing piece riveted into the combustion chamber. It is also of entirely different design and construction to the cast version.

The piston also differs from that in Robin's motor by having a conventional gudgeon pin and two piston rings, rather than a lapped piston, but the split con rod does look similar. The spark plug is an original and identical to those on Fred's engines and the air/fuel device entirely period as well. A look inside these early motors provides invaluable information, so thanks to Rich and Robin for wielding the spanners.