In 1990, that illustrious scribe on all matters relating to tethered hydroplanes, R.T.Pole, published the following article. We are indebted to him for permission to republish this appreciation of Sparky II. 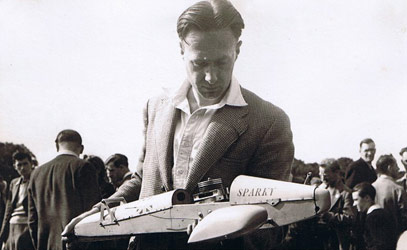 If you described Sparky II as the first modern tether hydroplane, you would not be very far wrong, for it incorporated the following aspects of design that are still adhered to today. It was the first published design to have at, one time. 1) slimline hull, 2) outrigger sponsons, 3) purpose built glow plug engine, 4) surface propeller, 5) bridle attachment to line.

The engine was of 14.22cc with 9:1 compression ratio (usually) and was over-square with a 11/8in. bore to only 7/8in. stroke. The exhaust and transfer porting were 360 degrees, and the flat topped piston had no rings. The 1/2in. diameter crankshaft ran on two ball races, there was a floating bush big end, and the crank pin drove the rear located rotary valve. The plug-in contra piston enabled the compression ratio to be varied by screwing the integral head and barrel finning up and down, and as the engine was designed as a glow plug unit from square one no provision was made for spark ignition.

Materials used in the engine were as follows: Cylinder barrel meehanite, crankshaft silver steel, crank webs cast steel, crank pin turned from a high tensile steel bolt then case hardened and press fitted to the crank web. The whole crank unit was balanced. The main crankcase was turned from Dural and left fairly chunky, and the flywheel was a brass rim with a Dural inner concentrically screwed together with 6 equi-spaced 4BA screws. The drive for the propshaft was formed in the end of the crankshaft. The rotary valve disc was also made from Dural and ran on a 1/4in. diameter silver steel pin. The carburettor was of 13/32in. bore with a 'cross tube' spraybar jet, this comprised a 1/8in. diameter brass tube drilled size 60 to form the jet, with a silver steel needle and knurled head set up on a 1/8in x 40 TPI thread which gave fairly accurate adjustment.

The total weight of the boat was between 6 1/2 and 7lb and although the record breaking runs where done on a mixture of 10% nitro methane, 25% castor oil and 65% methanol, most regattas were completed on a straight methanol/castor oil mix. The propeller was two bladed of 6 1/2. to 8in. pitch x 3 3/8 diameter.

At regattas, results were best possibly in the 1950 and 1951 seasons, when the following awards over and above those listed were won and retained; The Mears Trophy, The Miniature Speed Trophy, The Bedford Cup, The South London Trophy and The Paten Cup. All in all a very successful boat especially when you remember that George also ran Big Sparky and set A class records, and a paddle hydro which also managed about 40mph.

It was as a Design and Technology student in the late 60s that I first saw a picture of Sparky II. By then it was 20 years old, but it seemed so modern compared with many of the contemporary boats illustrated. I used Sparky as an example of the ‘if it looks right, it is right’ principle and it remained an ‘iconic’ design in my mind from then on. Like so many tethered hydroplanes, Sparky, sadly, was lost or destroyed at some stage and so I would never see it in the flesh so to speak. This was not quite the end of the story however. In 1998 an article appeared in Model Engine World revealing that the original engine of Sparky II had been discovered and retrieved by Peter Hill of the Retro Racing Club.

Before he left, George had passed one of his newer boats and a selection of engines and parts to the teenage John Skingley, son of Jack and Olive Skingley. Jack, who sadly  died in 1953 had, along with his brother Arthur, started building boats and competing in the 30s and Olive was a very well established competitor in her own right. John ran his yellow ex Lines boat at several regattas before parting with it and moving on to other pursuits. In 1960 Olive married Arthur Cockman, who had built the first of his famous series of IFIT flash steam hydros back in 1930. Following Arthur’s death in 1993 Olive loaned the last of his boats, IFIT 9, to the tethered hydroplane collection at Pitsea.

A selection of Sparky derived motors

Thanks go to the late Terry Everitt, John and Ron Skingley for completing the story. Keith Shepherd, Tony Pilliner, Stuart Robinson, Norman Lara and the Westbury family for the loan of motors and original photos.