Hell’s Bells
A boat, not an exclamation!

After several years of experimentation with the Suzuki motor that was abandoned, and the original motor, by now minus its mounting lugs, was installed. Stan was lucky in having access to a farm pond near to his home and continued to experiment and alter the boat and engine. The last alteration was a pair of outrigger sponsons with air scoops on the top that vented on the running surface between a pair of fences.

The is no contemporary evidence of the boat running in this state and following the deterioration of Stan’s health it was passed on. At some stage the motor suffered a comprehensive blow up, which may well have inspired the then owner to refurbish the boat, but as so often is the case, this never happened. Norman Lara obtained the remains and kept them for a while before indicating that he was prepared to part with it, which is when I became involved. An original boat and engine in any condition is a magnet for me, and so after some negotiation a virtual kit of parts came home.

All brackets had been cleaned and sprayed to match the colour they had been, and were put back on with some very unusual flat-headed brass screws that cleaned up pretty well. Mind you, I am not sure about the bridle attachments as these are just two screw eyes screwed into the side of the hull. Now illegal and I am not sure I would have trusted them anyway with this weight of boat running at 70+mph. Pictures were available to scale the name and trim from, and luckily, before stripping the paint, someone had measured the sponson flashes. Humberston Signs cut all the trim and names from vinyl and they offer a superb service for this type of venture.

A final bit of luck was the rev counter that Stan had built was included with the parts and in the bag of odd bits that Norman retrieved from his workshop, was the worm drive system for this. It did take a few minutes to sort out how all this fitted, but eventually it all slotted into place to make ‘Hell’s Bells’ complete and a fitting tribute to Stan Clifford and his willingness to experiment, right through to the end of his racing days. 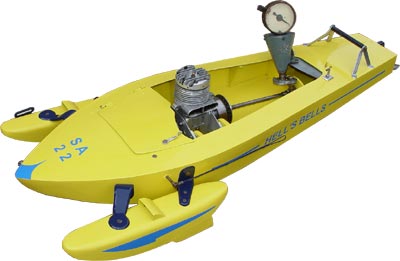 Thanks go especially to Norman Lara for keeping all the bits of this boat together and enabling the restoration to happen and to Ron Hankins for creating a very workable motor from the mess I gave him. Thanks also to Jim Free for heading photo, Steve at Humberston Signs for the graphics and Graham Smith for the discount on all the paint I used.

‘Cutie?’ A restoration project that became something more.

A deal was done for the engine, and there it was left until the aeromodeller happened to tell a friend of his where the motor had come from. He was promptly despatched back to Norfolk to buy the hull as well, which then was consigned to a garage for many years. I hate to see boats being neglected, and after several attempts, an agreeable swap was arranged.

Having brought the hull home it was possible to have a good look at it. The Brown Junior was obviously an afterthought as there was a substantial pair of brass engine mounts to fill the space once occupied by a much bigger motor. There were tether points on both sides of the hull, split pins through the sides and through reinforcing strips. This system had been seen before, usually on deeper hulls. The skeg was there and indicated a straight shaft and a talcum powder tin on the foredeck had done duty as a fuel tank. The best bit though, was that holding the hull to an oblique light revealed the shape of a name or registration number underneath the green paint, ‘QT V’.

At this stage, I was unable to identify the boat, who had built it, or even an approximate age, although the shape looked from the late 1920s or early 30s. What was obvious was that it had been built with steel screws and every single one of them had almost rusted away. These had to come out before anything more could be done and luckily they had rusted so badly that there was little grip on the stringers, so with a bit of care, and several days work, all but three came out. Something I have learned is that very early boats used just shellac as glue, and until resin and aircraft glues came onto the market, what was used was glue in name only and probably did no more than fill the joints. This boat was no exception and soon I had a complete kit of parts, with no two pieces of wood joined. A novel place to start, but it made cleaning off the grotty paint a doddle. With the boat in bits, it became obvious that is had been very well made, but I was still no nearer with an identification.

It still niggled me though, that even with the name it had not been possible to identify the boat. Peter Hill said that he had recollections of seeing details of it somewhere, and suggested that it might have been a design by J.C Hudson. After looking through twenty years of Model Engineers and other magazines I was no nearer finding the answer, even after it was featured as a 'pitbox' item in Sept 08. Peter then had another moment of clarity and thought that he had seen the design featured sometime in the 1920s. This was quite exciting, but again going back even further in the MEs still did not reveal anything. I was now at a loss until Peter again came up trumps. Looking through the early magazines for something else he had come across ‘A design for a Metre Hydroplane Hull’ in the Dec 17th issue of ME for 1931, and there was the 5th in the QT series, by D.C. Jeffrey. That begs the question as to why I did not suss it out earlier? Well, sod’s law, being what it is, dictated that of 40 years of Model Engineers, which issue was missing? Yes, Dec 17th 1931, yet another bizarre coincidence.