'A man and his models' 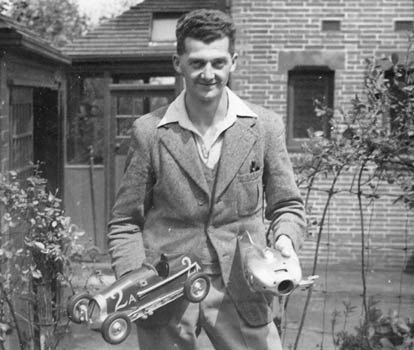 Frederick Gerald (Gerry) Buck was born in Hanley, Stoke on Trent on the 18th August 1916. His father, Fredrick Arthur Buck ran a family Jewellery business in Lamb Street Hanley and lived at the shop premises with his wife Alice whom he had married in the summer of 1915. In 1923 Gerry’s brother Arthur Ronald (Ron) was born.

After education at the junior and High School in Hanley, Gerry was apprenticed to Howell Stanway, a very large electrical engineering company in Hanley. His love of models was already well established, and so it was a short step to joining the newly established North Staffs Model Engineering Society where he was introduced to the delights and possibilities of internal combustion engines.

On June 1st 1936 Gerry Buck attended his first hydroplane regatta as a competitor, and just two months after its appearance ‘Icanopit’ recorded Gerry’s first ever win. During the course of the year, the Jewellery business moved from its original location in Lamb Street to new premises at Piccadilly in Hanley, where as F.A. Buck Jewellers it flourishes to this day. After many years of living ‘above the shop’ the family moved out to ‘Villa Marie’ at Sneyd Green.

‘Old Number 1’ as it came to be called was very large car with 6" ‘ash tray’ tyres. A semi scale tinplate body in the style of a racing car with a headrest, steering wheel, ‘aero screen’ and an exhaust pipe all added to the appearance. Paintwork in British racing Green (what else), a large number one and a Union Jack emblem completed the impressive model.

In December 1940 life changed forever for Gerry Buck. The factory at Crewe was in full production seven days a week and Gerry was still at work in the late afternoon of Sunday 29th December when a lone Junkers 88 headed towards the factory. Flying low, the Junkers dropped two large bombs at 3.09 pm. The first went through the roof of number 2 machine shop killing 5 women and twelve men. The blast blew machinery and shrapnel in all directions and in shop number 16 nearby Gerry was hit and crushed by flying debris. The second landed in a yard doing considerable material damage, but with no further loss of life.

A grim memento of the raid. A piece of the bomb casing.

Having been rescued and taken to hospital it was discovered that Gerry had severe injuries to one arm and even worse injuries to one leg and foot. Once the damage was repaired he was transferred to Winnick hospital at Warrington for a very long period of convalescence. While his mobility was severely restricted, his desire to be doing things was undiminished and it was not long before he had persuaded his father to bring in hand tools from home and a vice that was bolted to his bedside cabinet, so he could continue work on his car.

When he finally left the hospital Gerry had recovered the use of his limbs but the injuries to his foot were to continue to trouble him. He was unable to return to work in the industrial environment and in 1942 he went to work for the family jewellery business. The change in circumstances gave him more time to devote to the models and his first job was to repair ‘Number One’ damaged late in 1941, while he demonstrated the car to members of the North Staffs Society.

In 1942, with the flying of model aeroplanes prohibited, the editor of Aeromodeller Douglas Russell was looking for other avenues to fill the editorial space and so he proposed and sponsored the Aeromodeller Trophy for tethered cars. ‘Number One’ at close on 12lbs was far too heavy, ponderous and slow so a completely new car was designed.

In the spring of 1946 Gerry married Joan Kent who he had met at a local tennis club and moved in to Beacon House at Baddeley Edge, just outside Leek. An early visitor was Richard Dimbleby who conducted a long and detailed interview with Gerry for ‘Down Your Way’ on the BBC.

Gerry did manage to visit Eaton Bray in August where 2A shattered the British record with a run a 66.6 mph, some 10 mph quicker than the previous best. Convinced that the car was capable of running even faster the final run of the day established a new record of 75 mph. In an article in Model cars, the engine for ‘Dizzie Lizzie’ number 3 was revealed.

In a very rare insight into his travelling arrangements Gerry commented that he had built 2As carrying box strong enough to provide a seat in the corridor, which is where he invariably ended up on his long train journeys. Car travel is taken for granted now, but the effort required covering the distances that he did over the years using public transport or via lifts is yet another example of his extreme commitment. Gerry did not own a car at all until the early 50s, and even then it was shared with brother Ron.

This was really the swansong for 2A as a record breaker as it had far exceeded its original expectations and ‘Topsy’ was now ready to be revealed. Modelled on the ERA E type grand prix car, number 3 in the line of succession used a beaten aluminium pan with the home built engine laid horizontally on a spur mount driving the rear wheels. ZN racing wheels and pneumatic tyres ensured that the whole car was British from end to end. Painting and detail finishing would have to wait for a while, as Gerry was eager to test his new creation. The level of design and manufacturing skill he displayed can be judged by the fact that the car on its first trial run exceeded 85mph. This alone was an incredible achievement as the engine had not been run before the test, but just days later on its first ever official run, ‘Topsy’ upped the 10cc record to 87.3mph. Two weeks later the 90mph mark was broken for the first time.

With 80 and then 90mph being achieved in only a matter of months, comments about the level of competition were now even more relevant. Several cars were now sporting imported Dooling and McCoy engines and as Gerry had predicted competition was becoming very close. At the Whit weekend meeting at Eaton Bray a 91mph run in the Austin trophy was only good enough for second place, but on the Monday ‘Topsy’ excelled, as it reeled of lap after lap in the 90s taking the ¼ mile at 97.55, the ½ mile at 93.26 and the mile at 90.45. In one run he had set a new fastest ever mark and taken the mile record by 4mph.