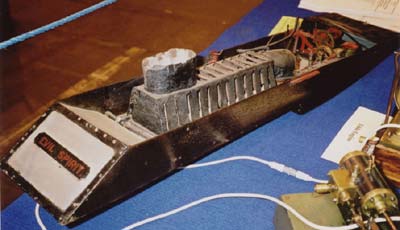 Tethered hydroplanes have a hard life at best, and none more so than flash steamers, so finding survivors is rare. The oldest is H.H Groves ‘miniature hydroplane’ built around 1912, but a photo from Jim Free set me on the trail of another early example. The photograph was of a steam powered boat with the name "Evil Spirit" emblazoned across it’s stern and thought to be from the mid 1920’s. MPBA historian Peter Hill revealed that a Fred Westmoreland built "Evil Spirit", not in the 20’s, but in 1915. Further, the boat was a record holder, and the first to break the 25mph barrier, having beaten the 24.25mph set by HH Groves in 1914 with Irene IV, a record it was to hold until 1922. Knowing that the boat was still in existence, I had to find out more about this vintage hydro.  I discovered that 'Evil Spirit' had been described extensively in early Model Engineers and that its history up until 1934 was well documented. Subsequent, access to the Groves and Westmoreland archives has enabled me to produce a more accurate profile of Fred Westmoreland and his activities, which included the building and running of 'Evil Spirit'.

It transpires that 'Evil Spirit' was not Fred's first hydroplane or even the first to carry the name. By 1914 he had achieved 16.9mph with the IC engined 'Fairhope' but he admitted to being shocked by the speeds being reached by the flash steam powered craft. The Noble brothers ‘Bulrush’ had taken the record at 22.77mph in 1913 and H.H Groves 'Irene IV' increased the record to 24.25mph in 1914. The superiority of the flash steam hydroplanes provided the  motivation for Fred to build himself a similar boat, using the plans and constructional details for Irene III that Groves had published in the Model Engineer.

A decision was made to temporarily fix the new engine into the hull of Irene IV. Fred described the trial, "A few hours were hastily rushed into the work, and things were soon in shape. We could not quite get the new engine into perfect alignment with the propeller shaft, so we decided to leave the rest to chance and make our way to the Victoria Park Lake. All being in order, the hydroplane was fastened to line, and things were soon humming merrily. On being released, it was soon in its element. After covering two and a half laps on the circular course it pulled up dead. We wondered if any rival had stolen a march on us with a submarine. However after towing into port we found we had not been torpedoed at all." The engine crankshaft had broken yet again, the rotary valve had seized and the driving shaft was twisted. When they worked out the speed it was 24.5mph over 250 yards from a standing start, Fred declared himself well satisfied with that result, and had enjoyed a great days sport into the bargain.

Three days after the armistice in November 1918 'Model Engineer' published an article that claimed a new speed record of over 30mph for an American boat called 'Elmara'. Fred joined in the lengthy correspondence that followed questioning this claim. The builder Mr J Fawcett Rapp readily acknowledged that 'Elmara' was a close copy of 'Evil Spirit' and that although the boat had exceeded 30mph, this was for just a portion of a lap and not a measured distance. Further claims from America for speeds over 70mph were dismissed as a total exaggeration. Fred accepted that speeds in excess of 30mph were perfectly possible as he had achieved this regularly, but never over the regulation distance required

Following his death, Fred's son Frederick ran 'Evil Spirit' on occasions before passing it on to David Roberts, the son of one of Fred's many friends. It remained in David's safe keeping for several years before it was offered to its present custodians, the Northern Association of Model Engineers  in the hope that people could once again see this record breaker. 'Evil Spirit' has been with N.A.M.E for around forty years, and it was on their stand that the heading photograph was taken that prompted my interest in Fred Westmoreland.

A decision has been made to keep the boat in exactly the condition it was found. It is complete and would almost certainly still run with very little work. A split in the hull side is the only sign of any damage after 91 years. ‘Evil Spirit’ is now the second oldest tethered hydroplane in captivity.

True to Mr Roberts' intentions, 'Evil Spirit' is regularly displayed at exhibitions and events around the country by the Association, and continues to generate huge amounts of interest.

Our thanks to Jim Free for setting this whole thing in motion, to Frank Cooper and Alan Budd of N.A.M.E for allowing us access to Evil Spirit and providing information about its recent history and to Peter Hill, Ken Lawton and Jim Hampton for early archive material.