Chrysis, a survivor from the 20's and Little Star 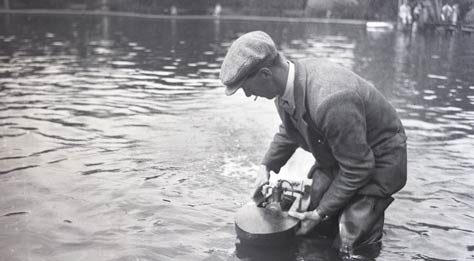 The boat had numerous coats of paint of obscure origin and he started strip down the outside of the hull. Having worked through white enamel the original name could be clearly seen incised into the plywood. The boat had been altered numerous times and there was considerable damage to the deck and internal woodwork, and the remains of a very crude fuel tank support were evident. All the running gear was missing, as was the engine. All in all a sorry state, but a very early example of a tethered hydroplane.

In the early 20s, French was building boats from tinplate as was the fashion, but an inability to form the vee bottom to the hull made him change to ply and Chrysis was one of the first to be built from wood. There is a bit of a mystery here as Mr French talks about Vee bottoms on his boats and in an article in Model Engineer shows the underside of a boat purporting to be Chrysis with the vee clearly visible. Close examination shows this boat not to be Chrysis at all and the actual picture above it shows Chrysis with a flat, single stepped bottom. Chrysis was to be the subject of a series of articles in Model Engineer in 1932, describing how to build a ‘beginners boat’. If it did have a vee bottom at some stage there is no evidence in the construction of the boat.

In another of his occasional articles, R.T. Pole discussed what must surely be the prettiest tethered hydro ever built, Mr L.J French’s ‘Little Star’, which was the 15cc record holder from 1936-38.

A ‘polysphenic ship’ was the term used by the Rev. C.M. Ramus in 1870 to describe his 29½" long rocket powered model hydroplane which featured two steps and three equispaced planning surfaces, the literal meaning of polysphenic being many wedges. Over the years since 1870 the multi-stepped hull has been tried many times and the most successful of these was built in 1935 by Lionel French, who had stated in a 1930 Model Engineer, that a multi-step hull could never be as conducive to flat-out speed as a single step hull.

Although the thrust line on the plan indicates an articulated driveline, the original had a straight shaft, but was changed, as it proved unsuccessful. The propeller was placed in front of the tail skeg and measured 2 5/8" diameter x only 3 ½" pitch, which was much lower than the norm and allowed the engine to run up to 15,000 rpm.

It transpired that Mr French’s interests had changed after the Second World War and the boat had not been run at regattas since 1940. The engine had been bench run, ‘off load’, on several occasions, and on one of these tests 27,000rpm was claimed.

Mr French’s new interest was motor cycle racing and he competed in the I.O.M TT races on five occasions. He raced in the Clubmans classes in 1948/49/51 and the TT itself in 1952 on an E.M.C Puch, finishing 11th, and in 1953 on a Sulby-EMC he had built himself, retiring from the race. A racing crash put an end to his riding career but he continued his involvement, by sponsoring other people.

OTW thanks R.T. Pole for permission to use the article, Peter Hill of the Retro Racing Club for the additional information and photograph above, which was taken by Mr French in 1987, prior to the boat being restored. Photos courtesy of the Westbury family archive and Ken Smith.