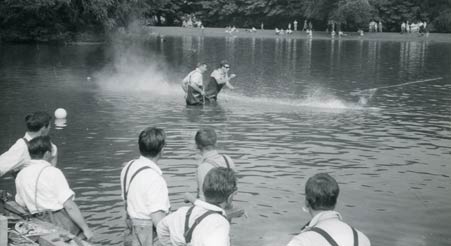 I first became aware of the Society during the early 1950's. My father used to take me along to the lake on an August Bank Holiday to see the boats. In 1952 I started at St. Albans Boy's Grammar School and one of the routes to school from the City Station took me past a model shop (An offshoot of a plumbing shop I seem to remember). Kiel Kraft "Flying Scale" kits were bought and made – very few flew well and most crashed. At that time the "All Britain Rally" at the Handley Page aerodrome, Radlett, was an annual event and I used to be taken there in the morning, and collected in the evening. One thing I did notice was that the prevailing wind blew from the airfield, over the main St. Pancras line and on over some gravel pits the far side. There was a continuous stream of people going over the fence, crossing the railway and disappearing into the gravel pits – and there never seemed to be nearly as many coming back. I have never liked running or climbing trees, and my dad suggested to me that model boats would be a better bet as they took time to sink, and I would be more likely to be able to get them back.

There were probably other models, but it was the moving bits that caught my imagination. In charge was Bert Saunders and he put up with me for the whole afternoon asking questions (no doubt many of them dumb). The result was that I joined the Society at the very next meeting. Peter Lambert was secretary, and Bert Saunders was chairman. I discovered a friendly bunch only too willing to help a raw young beginner. I soon realised that there were a number of leading lights in the hydroplane world among the members.

Ken Hyder ran a C restricted class hydro – that was for commercially made engines up to 10cc. At that time he was running 'Slipper 5' which was the British record holder at just over 70 mph. In those days, the competitor had to nominate half, one and a half or two and a half laps before timing was started. Ken always nominated two and a half, and for two laps the boat would trundle round probably at about 30 mph much to the derision of the spectating public. During the next half lap it appeared to almost throw itself out of the water, and as the timing started it was up to 70+ mph. Very spectacular and accompanied by lots of OOHs and AAHs from said public.

This was presented with the comment that "you know the length of the boat, the pitch of the prop and you can measure the distance between the drops of water and determine the slip. You also know how fast it was going and so can work our how fast the engine it going" All useful information. The photo above shows Ken Hyder's Slipper 5 at around the 70mph mark.

During the summer months some of us would meet at the lakeside during a Wednesday evening, sometimes to run hydroplanes and sometimes to practice straight running.  On one of the hydro evenings, Stan Clifford was trying out 'Polyester'. 90mph – wow! 20mph faster than ever before. During the following runs, the speed gradually dropped to the normal 70, with no clue as to why that wonderful run had happened.

As you may gather, most of my interest was with the boating side of the society.  During these first few years with the society, the 'Spraymaster' gave way to a Vic Smeed designed cabin cruiser which eventually had the cabin replaced by a streamlined top _ see photo. I also managed to build three IC engines – all of which ran after a fashion.

By now I had passed my driving test, and used to drive Ken Hyder’s "Bardahl" van transporting members’ boats to various regattas. It may have only been a Commer van based on the Hillman Minx, but it was the height of luxury and performance compared with the converted Morris 8 Post Office van of my fathers that I had learnt in.

By 1959 I had became interested in motor sport, and I’m afraid that the modelling took a back seat until the late seventies. Having been making a bit of silver and gold jewellery for a few years, and bought a lathe with the proceeds, model engineering was calling again. Before long, I decided I should rejoin the St. Albans Society. A phone call to Peter Lambert elicited the information that they still met on a Wednesday evening. Needless to say, I was at the following meeting, discovered that not only was Peter still secretary, but Bert Saunders was still in the Chair. I was greeted as though I had never left (rude comments about the beard notwithstanding), it was wonderful.

Many thanks to Malcolm Beak for sharing his memories and photo's. Thanks to Phil Abbott, Tony Pilliner and John Hyder for additional photographs.

Each year over the August bank holiday weekend, St Albans played host to the MPBA for a two day hydro regatta at the lake in Verulamium Park, along with a straight running event. Saturday's main competition was for the Speed Trophy while the principal trophy on the Monday was the International competed for since 1925. Torrential rain in 2014 led to the event being abandoned and in 2015 a combination of avian flu and toxic mud to the regatta being cancelled at short notice. Sadly, as a legacy of 'water engineering', a lack of scour from the river and the ongoing problem of how to dispose of the mud meant the event was cancelled yet again in 2016 and subsequent years. The situation regarding the future of Verulamium Lake has still not been resolved meaning there is little likelihood of hydroplane racing ever returning to this historic venue. We take a look back with this gallery of photographs.

The last regatta at St Albans

Thanks to Jim Free, Bob Kirtley, Tim Westcott, John DeMott, the late Terry Everitt and the Westbury family for this selection of photos