Naiad 3. Survival of a water Nymph. 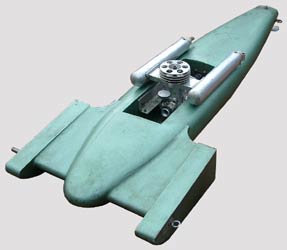 The Naiads were water nymphs that lived in the wells, springs and fountains of Greek mythology. Whilst they could travel through the watercourses, if they left their aquatic environment they would dry out and die. Naiad 3 is a water nymph that has avoided this fate and survived for more than 50 years in perfect condition, although it has certainly dried out by now.

In the years immediately following the second war, there was rapid development in the design of tethered hydroplane hulls. The scow or ‘kipper box’ was giving way to the three-point ‘prop riding’ hull. Numerous routes were followed including a narrow hull with the sponsons on outrigger bars, which is now universal, or the American ‘Ventnor’ trend with the sponsons or other running planes integral with a ‘boat shaped’ centre section. Whichever design was used the aim was to get the boat riding on the sponsons and prop without getting so much air underneath the hull that it took off. Most of these designs led to very boxy and slab sided boats, easy to build but no so easy on the eye. One group of competitors, many of them from the Bournville club, eschewed this path and produced some beautifully streamlined and graceful designs. One of the most elegant was George Stones 5cc Lady Cynthia, but Tom Dalziel from Bournville produced Naiad 3, which was equally fascinating.

The boat was a delightful shape but that was probably its downfall as the shallowness and lack of lift caused it to nose dive, finally causing severe damage when it hit the lake bottom.

The 15cc motor is a work of art with no surplus metal anywhere. At first glance it may look like a Lines motor but the similarities end with the twin silencers.

Naiad 3 proved to be both successful and long lived being run regularly into the 1970s. At some stage new, longer and deeper, sponsons were added, although the stark rectangular shape of these detract from what would otherwise be one of the most attractive boats of the period.

Thanks to Dave Scarnell for the very detailed pictures, to Arthur Wall for information about Tom Dalziel and Peter Hill for original photos