The arrival of the first car from the company, called simply the 1066 Model Racing Car, was somewhat organic, as the parts came on to the market bit by bit, with the chassis being the last item offered. A body was added even later. Every single component for the car was given a code to identify it.

CL2 was a separate unit which mated to the flywheel via the three screw holes used for the shoes on CL1 This clutch had two shoes which were spring loaded so that they were permanently engaged and provided a ‘soft take up’ Output arrangements were the same as for the three shoe version.

If the published plan for the car is followed, the engine will only fit if the CL2 clutch is used. The holes for the motor mount must be drilled further back if the CL1 unit is to be used. This then limits the space for the fuel tank as well. As an aside, if a standard 3/8" plug is fitted into the motor it fouls the body. Another example of a 1066 ‘design glitch’

The car was finished off with a large rectangular fuel tank between the chassis members and two NIFE cells in a battery holder attached to the rear of the chassis. 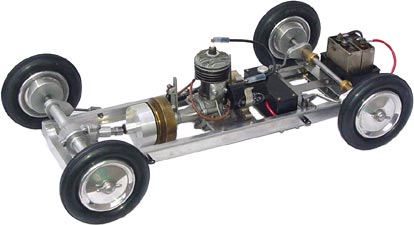 Original adverts show what is referred to as an ‘ERA type body’ but this does not look the same as what was eventually produced and certainly not like an ERA. The production body was a simple pressing from 20 SWG aluminium that has a more ‘twenties’ look. The body was available in three states. Unfinished for 24/6 (£1.42). Buffed and polished at 29/6 (£1.47). The most expensive option was to have it coloured and anodised for a total of 38/6 (£1.92).

In 1949 a ‘Luxury Kit’ was advertised, which included a buffed and polished body, a large front valance, a radiator grill, and upholstery for the cockpit

The CH1 chassis was very flimsy and really only suitable for motors up to 5cc. Chassis kits were advertised for 2.5, 5 and 10cc cars, but as far as we are aware, there was never a 2.5cc car that existed as a separate entity.

The Conquest represented a complete departure from the previous car offered by the company. Intended primarily for the Conqueror motor, the Conquest was designed for a 10cc spur drive motor and mount.

The 5cc Hawk is the engine shown fitted to the MRC car in all adverts and the 1066 catalogue. It is loosely based on the earlier, ‘Westbury inspired’ Falcon design, with many parts being interchangeable. To add to the confusion slightly, it is wrongly captioned as an Arrow in Mr Clanfords A-Z. The most obvious differences between the Falcon and Hawk are the separate screwed in Cast Iron barrel and the change to RRV induction. These changes required new set of dies for the crankcase as well as patterns and cores for the cylinder. The basic design was similar, but the crankcase was altered to accommodate the new separate barrel with a venturi boss being added to the rear face. The barrel was new, but relatively low tech, and to ease the casting and machining of the ports reverted to a separate transfer cover. A ground and honed cast iron piston ran directly in the iron cylinder. The front housing, CB assembly and head were all interchangeable with the Falcon.

Because of the restrictions on industry that existed at the time, the engine was initially only available for export, but by Nov 1948 was made ‘available to the home market’.

The Hawk was available in 2 versions, H/RC for cars and boats, H/A for planes. Both featured a simple trumpet shape venturi with a two-part spray bar screwed into an enlarged centre section. For aeroplane use, a clear plastic tank with an aluminium top was attached to the underside of the venturi using a small bracket and brass draw bolt. A long choke tube replaced the fuel nipple.

The H/A version intended for planes had a standard Falcon style crankshaft whilst the car and hydro model had a hardened and ground full circle version, specially designed to ‘improve the volumetric efficiency of the crankcase’. Westbury designed his engines with very low crankcase compression, as he reasoned that overcoming this compression reduced the power of the engines. How wrong could he be? The change from sideport to RRV induction and reduction in the crankcase volume must have increased power noticeably.

Adverts for the MRC car in the 1066 catalogue show a Hawk with a CL2 clutch fitted to the chassis, and this is probably where most of the engines were used. It is also interesting to note that the three-shoe clutch could not be fitted without redrilling the chassis and repositioning the engine. A further ‘design glitch’ meant that the pressed aluminium body could not be used with a 3/8" plug as fitted to the engine.