"B" class flash steamers, the last of an era. 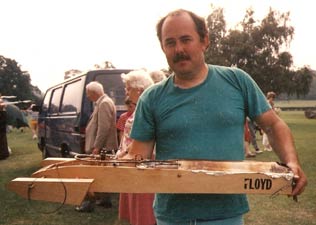 I spent the whole of the summer trying to make the boat run, the piston valve would seize up if it was a good fit and leak steam like mad if it was a bit looser. The timing also seemed to be very critical. I never did get this engine to run successfully. It now sits in a cabinet at home waiting for me to build a straight runner to put it in.

That summer I met Frank Jutton at St Albans and I was asking about suitable sized propellers. He initially offered to lend me the one from TNT, but had second thoughts and said I could have TNT. I went and collected it later that summer on a business trip to Farnborough air show. I never did use the propeller but built a modern shaped one from steel. I had learnt a lot that season.

From October 1990 Model Engineer published a series of articles written by Bob Kirtley on how to build his "A" class flash steam hydroplane, complete with drawings.

The second photo below shows Steve Turley with the blowlamp along with Bob Kirtley and I, who probably at the time couldn’t believe it was all working.

That autumn I also won the Windermere Trophy for breaking a record by the largest amount for that season.

After that it was run a few more times, I think the last outing was at Amiens in France, 75.40mph ( photos below).

This boat is the last of a long line of record holding 8lb "B" Class flash steamers. A couple of years later the weight was changed to 9lbs as it was alleged it was too difficult to achieve the lower weight, and by increasing it, more people would build hydro’s and race this class.

I went on to run A3 hydro’s and Floyd was retired. One day perhaps I will build a new boat with a bigger boiler as a pound is a lot of stainless tube.

After several years of pursuing other interests Olly returned to tethered racing in 2008 but with cars rather than boats.

Many thanks to Olly Monk for this fascinating article and photographs. Thanks also to Jim Free, Terry Everitt and David Giles for the additional photos used.