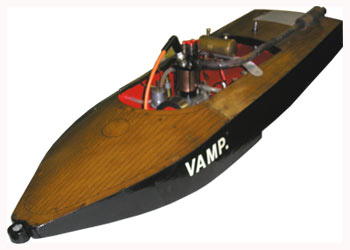 The discovery of a vintage hydroplane is always exciting, but unless there is some feature that can positively identify it, then origins, builder and past can only be guessed at. A name gives that extra level of anticipation, as there is always a chance that it will provide a key to unlocking the past of the particular boat. The delightful tradition of naming tethered cars and boats gave an identity to each that could usually be followed through magazine articles, results and photographs. While the cars became anonymous relatively quickly, it was not until the late 60s and early 70s that the bulk of boats lost their names. The name was to provide the key in this case.

F.N. Sharp competed for many years, regularly featuring in results and the ME Speedboat Competition. His scow ‘Mona’ was the best known of his boats, both for its success in the ME competition and subsequent theft, along with its engine, but an earlier, less well known boat was none other than ‘Vamp’. Although a regular competitor, Sharp was better known for work with engines, with many of his fellow club members and numerous others around the country using motors built or inspired by him.

The date of the article would infer that ‘Vamp’ was built around 1928/29 and the photos show that it has remained unchanged since then. It still has the water-cooled motor and even the ‘snubber’ on the bow. It seems likely that ‘Vamp’ would have been used primarily for straight course or steering events and ‘Zulu’ for ‘round the pole’, but until speeds became excessive, many boats were used for both events and certainly 'Vamp' has a tether plate just above the name.

In the photograph from Model Engineer, Zulu is shown with a conventional carburettor and float chamber while Vamp has the earlier surface carburettor with a very long intake pipe. Also to be seen in 'Vamp' is a large wooden cased trembler coil and these features indicate that the engine is a very early model and that 'Vamp' could be even earlier than believed.

‘Vamp’ now joins Chrysis as a survivor from the 20s, with the advantage that it still has its original engine, and is far better preserved. It has to be one of the most significant discoveries in a long while, and for OTW it has been a great thrill to be able to identify the boat and piece together some of its history. There is every intention that ‘Vamp’ will again take to the water at some stage, which would be a remarkable achievement as it would certainly be the oldest tethered hydroplane in running condition.